As I said to William Fox-Pitt as he walked up to me after his horses fetched some drama on Friday, "If we weren't sweating enough with the heat, we're definitely sweating buckets now." William's horse, Parkmore Ed, was asked to be represented to the ground jury during the afternoon's first course inspection.

As eventing is an endurance sport, a big part of it is the horse's welfare. Therefore there is a veterinary inspection before and between each phase of the competition. The dressage starts on Saturday, but this was the first time the horses have been inspected. There were loads of horses so the whole thing took two hours, and the British horses were some of the last to be inspected.

Until this point only a couple of lesser known horses from Brazil and Chile had failed and we were quietly feeling pretty confident that the Brits would pass with flying colours, so it was a serious shock to everyone watching when William's horse was suddenly asked to be seen again. 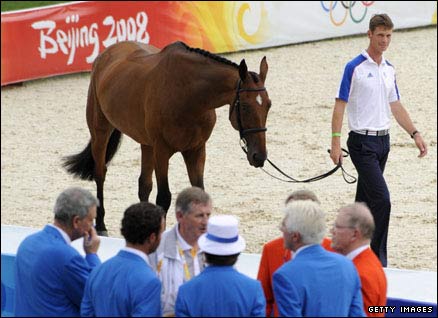 I could see the nervous glances between his team-mates. They must have been thinking that this chance of team gold was flipping away, but none of us watching could see anything wrong with the horse. He looked a bit lazy as he trotted in front of the jury, but totally sound.

Eventing press officer Winny Murphy said she thought it was to do with an insect bite on his stomach, but we had to sit and wait at least 15 minutes while they inspected several more horses before William and his horse were seen again.

The whole stadium went silent while we waited to hear their decision. Then the team and the audience watching visibly swooned with relief when it was announced that Parkmore Ed had been accepted.

I managed to grab a word with William straight afterwards and he said he was "totally surprised with the whole thing."

It was a problem with a blister on the horse's girth area caused by either rubbing or an insect bite and he questioned whether the jury had had a "boring afternoon." But I wonder whether William was also secretly thinking about one of his other horses, Tamarillo.

I'd heard on the grapevine that William would have really loved to have ridden Tam here in Hong Kong. We'll have to wait and see whether Ed will prove him wrong.

So onto the opening ceremony. We've got our very own much much smaller version in Hong Kong, but it's so amazing to be at an Olympics and it is a few hours to go before the dressage starts at 6:30 on Saturday morning (Hong Kong time).

Lizzie Greenwood-Hughes is a presenter on BBC Sportsround and Newsround, and BBC Radio 5 Live’s equestrian reporter. Our FAQs should answer any questions you have.