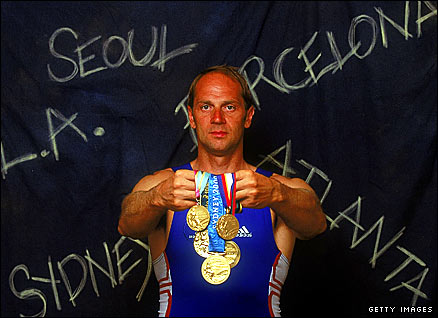 Sir Steve Redgrave reigned supreme on the Olympic rowing lakes of the world for 16 years, picking up six medals across five Games.

That's right, six medals - everyone forgets the coxed pairs bronze he won at the 1988 Seoul Olympics with Andy Holmes and cox Patrick Sweeney.

I suppose you can be forgiven for forgetting the bronze seeing as how every other Olympic boat he raced in won gold.

The first came at the 1984 Los Angeles Games in the coxed four with Martin Cross, Holmes, Richard Budgett and cox Adrian Ellison.

By 1988, he raced in two pairs with Holmes, won the coxless event and came third in the coxed.

In Barcelona four years later, Redgrave clinched his third successive Olympic gold when he teamed up with Matthew Pinsent for the first time on the Olympic stage in the coxless pairs.

And the duo repeated the feat in the Centennial Games in Atlanta. After a draining race, Redgrave told the BBC: "If you ever see me in a boat, you have permission to shoot me."

But the durable rower returned to attempt to win a record fifth consecutive Olympic title in Sydney.

And the British public were hooked with more than 6.5m viewers tuning into BBC at midnight to watch what has since been voted the greatest moment in British sporting history.

A tense race finished with the British boat, which featured Pinsent winning a third gold, Tim Foster and James Cracknell, crossing the line just 0.38 seconds ahead of the Italians.

Redgrave had won an unprecedented fifth consecutive Olympic gold in an endurance event.

What are your memories of that fantastic race? Were you one of the 6.5m screaming at the TV in the closing stages as I was?

And where does Sir Steve's Olympic record stand alongside some of the other greats of the Games that have been mentioned in this countdown?

Peter Scrivener is a BBC Sport Journalist. Our FAQs should answer any questions you have.