Is Phelps really the greatest?

For some people, it's a question that's already been answered.

The greatest Olympian of all time? Michael Phelps, simply because of those unmatched 11 gold medals.

Done deal. Or is it?

By some calculations, Phelps isn't even the most successful Olympic athlete of all time. Gymnast Larissa Latynina has the bigger overall medal haul by five, even if she has a mere nine golds sprinkled in among her total of 18.

Phelps, of course, might bag another three in the next few days - but stats can only ever tell part of the story.

If we're talking Olympics, there are other factors we need to bring in - the competitiveness of the event, the difficulty of competing in multiple medal races, the era in which it took place.

Then there are the more nebulous aspects of being a great Olympian: sportsmanship, demeanour, post-career reputation.

Let's line up a few contenders.

In terms of medals alone, Carl Lewis's record is impossible to argue with: nine golds, spread over 12 years, with seven of them coming in individual events. Phelps currently has six golds from solo swims and five from relays.

Lewis also scores well for consistency, winning his first long jump gold at the age of 23 and his fourth aged 35.

Whether his golds in Los Angeles are devalued by the Eastern Bloc boycott is debatable. He had won the 100m, 4x100m and long jump at the inaugural world championships the previous year and had been ranked no.1 in the world over 100m since 1981.

What is unarguable is that he tested positive for banned substances three times before the 1988 US Olympic trials, initially being banned from the Seoul Olympics before being let off with a warning.

Lewis's own reaction - "There were hundreds of people getting off," does little to protect his reputation, and brings to mind the famous line from Ed Moses after the '84 Olympics, when he said of his team-mate: "Carl rubs it in too much. A little humility is in order."

Jesse Owens only ever had the chance to compete at one Games.

After his four golds in Berlin - and three Olympic records - he found himself banned by US authorities for running in commercial events, and eventually suffered the indignity of racing against horses to make ends meet.

Yet his all-round achievements as an Olympian arguably out-strip those of Lewis. Unlike Lewis, Owens' off-track behaviour only added to his myth, and not just for the significance of his performances in front of Hitler in 1936. 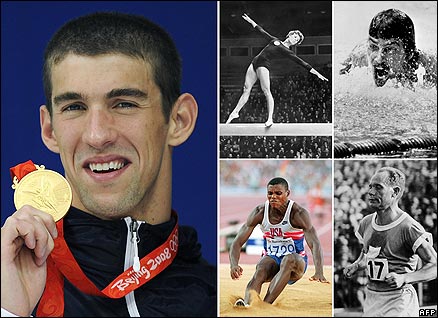 An advocate of the virtues of hard work and loyalty, Owens spent his later years travelling across the world as a US goodwill ambassador, even after being treated shabbily by the authorities on his return from Germany.

He also tried to convince President Carter to call off the US boycott of the 1980 Olympics in Moscow, arguing that the Olympics should never be used to make political points.

Of the other pre-war candidates, it could be argued that Ray Ewry (three golds in Paris in 1900, three more in St Louis four years later, two more in 1908) had nothing like the competition that Phelps faces today.

Against that is his back-story - an Olympian tale of overcoming polio and a childhood in a wheelchair to win gold in explosive if idiosyncratic events like the standing high jump and standing triple jump.

Perhaps the only weakness in distance-runner Paavo Nurmi's case is the one thing he could do nothing about - the relative weakness of his rivals.

It wasn't his fault that there were no east Africans to race against when he won his nine golds and three silvers between 1920 and 1928.

But while it seems incredible that he had just 26 minutes to rest between winning the finals of the 1500m and 5,000m in 1924, it also highlights the limited nature of the competition.

At the same time, he could have claimed further golds - had he not been excluded by officials from the 10,000m in Paris for health reasons, and then banned from the 1932 Olympics for receiving a tiny amount of money in travel expenses.

Another to fall foul of the sort of regulations that Phelps will happily never face was the wonderful Fanny Blankers-Koen.

After winning her four track golds at London 1948, she was prevented from entering the high jump and long jump - at which she was world record holder - because athletes were only allowed to enter a maximum of four events.

By the time of her triumphs, too, she was already 32 years old. Had war not forced the cancellation of the 1940 Olympics, it's conceivable she could have ended her career with as many as 10 golds.

Emile Zatopek might have won just one gold at those London Olympics, but four years later he took three more, including - famously - the marathon in his first ever attempt at the distance.

Nadia Comaneci went one better, winning five golds in addition to three silvers and a bronze.

And what of Al Oerter, winner of discus gold at four successive Games despite a car crash that nearly killed him, and an Olympian to his core?

Oerter, a talented abstract painter, even curated an exhibition called "Art of the Olympians" which included work from long jump legend Bob Beamon.

To the Brits, and a man who only won two golds but took part in 10 different events - Daley Thompson.

In Moscow and Los Angeles, Thompson proved himself the greatest all-round athlete of his era, mastering disciplines as polar opposite as the shot putt and pole vault.

Sir Steve Redgrave, meanwhile, managed the seemingly impossible task of winning five golds over five Olympics and still being the most modest man in the Olympic Village.

Phelps will find it impossible to compete for as long as Redgrave. Redgrave, equally, could never enter the number of events that Phelps can. Neither can he be marked down for winning all his golds as part of a pair or four rather than an individual.

Redgrave has proved himself a fantastic ambassador for his sport. Phelps, at 23, is growing into the role.

Finally, for now, what of the closest to Phelps we've ever had before - Mark Spitz?

The numbers are almost identical - nine golds for the Californian plus a silver and bronze and world records in every event at the 1972 Games.

Spitz even claims he could have won another gold, had the 50m freestyle been an Olympic event at that time as it is now.

What nudges Phelps ahead is the overall medal count, and the fact that Spitz won more golds in relays than individual events.

What favours Spitz is the seven golds from a single Olympics - but maybe only until Phelps equals or betters that over the next few days.

So - what do you think? Anyone I've missed or underplayed?

And for the record, I haven't made my mind up yet, although I'm edging towards Owens as the embodiment of everything the greatest Olympian should be...

Tom Fordyce is a BBC Sport journalist covering a wide range of events in Beijing. Our FAQs should answer any questions you have.