What makes Phelps so special?

Michael Phelps showed no sign of letting up in his pursuit of breaking Mark Spitz's record for the most amount of medals won in one Olympic Games.

First he romped home in the 200m butterfly in a new world-record time.

He gave all swimmers around the world hope when he moaned he couldn't see down the last 100m due to his goggles filling up with water!

This is usually only a problem that faces young swimmers at club level. I'm just thankful he didn't stop and look for the lifeguard to tighten the strap.

And then there was the 4x200m relay - if ever there was one of his gold medal opportunities that was nailed on, it was in this race.

With such strong middle distance team-mates the world record always looked under threat. However, to break the magic barrier of 7.00 minutes was simply phenomenal.

Lets take a look at what makes Phelps so special:

All swimmers look pretty much the same when in their swimming suits but if you take time to truly weigh up Phelps' physique he looks almost like a cartoon character.

If you were guessing his height from looking at his legs, you would more than likely say less than six foot. Switch your gaze to his freakishly long torso and you you probably say he would be more like a 6ft 8in!

The issue most people have with swimming is the legs drag through the water and in many instances can slow them down. His long torso and short legs reduce this drag and allow for maximum propulsion.

Just like most people have a shoe size that is the same length as the distance from their wrist to the elbow, we all generally have a wingspan that is similar to our height.

Michael Phelps' wingspan based on his height should be around 196cm. His actual wingspan is 208cm and this provides perfect levers for him to pull himself through the water.

When Phelps steps out the water after one of his final swims you can generally see what he had for breakfast! It would seem there is no fat on him at all and at a guess I would say it was around 4% and obviously based on power to weight ratio this allows him to maximise his effort into speed. 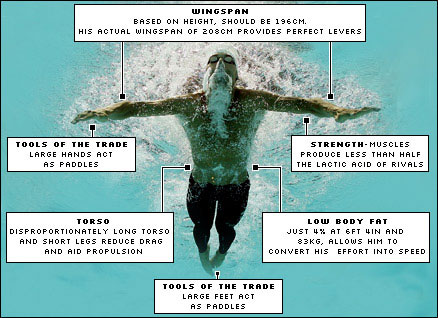 I'm sure if you checked any doctor's chart a 6ft 4ins, 83kg man would definitely be seriously underweight.

All athletes produce lactic acid when their aerobic system can no longer keep up with producing the amount of energy required to perform.

As a matter of course all swimmers need to swim down to get rid off this 'acid' so they are ready to perform at their potential the next time they race.

Phelps has extraordinary powers of recovery; as well as not producing usual levels of lactic acid he also needs only minimal recovery before he is ready to go again.

On Tuesday he swam a sensational race in the 200m freestyle - and was back in the pool moments after the medal ceremony for the 200m butterfly heats.

"In between the 200m free and the fly heats I have probably had in total about 10 minutes to myself," he told to US TV. That takes phenomenal mental focus too.

Tools of the trade

With large hands and size 14 feet he has all the right equipment to swim super fast. Without these paddles and fins to get him through the water he would not be equipped to make an assault on all the world records.

Similar to Tiger Woods this man just does not know how to quit.

With 11 Olympic gold medals to his name already and a possible three more up for grabs in Beijing plus a similar medal assault in London could Michael Phelps not only end up being the greatest Olympian in history but also the greatest sportsman ever?

Steve Parry is a former Olympic medallist. Our FAQs should answer any questions you have.