With one spontaneous gesture, a nervous tic really, Boris Johnson signalled exactly how London should attempt to follow the glitz and grandeur of the Beijing Olympics: don't even try.

The London mayor's comedy salute as he set foot on the red carpet at the Bird's Nest was a late bid for my moment of the Games.

It encapsulated what many British observers here have felt throughout these Games: we're all pretty blown away by the show the Chinese have put on, and we certainly can't afford anything as fancy as this, but we'll muddle through in 2012, and we'll try to put a smile on your face while we do it.

And did I really see him shout "I want the flag!" to Olympic impresario Jacques Rogge before it was his turn to do the ceremonial swirling bit? If so, I apologise for voting for Ken: you are a legend, even if you don't know what to do with your hands.

So that's that then. They are sweeping up around me after the most spectacular closing ceremony I can remember, and there really is no getting away from it - we are the next hosts of the summer Olympics. Gulp. 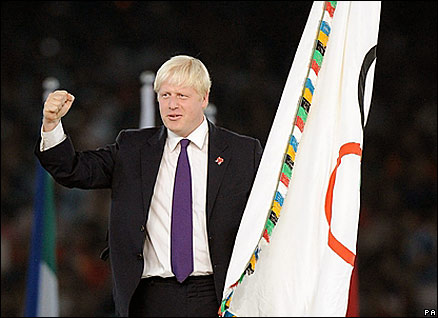 It's a huge challenge - make no mistake - but also a massive opportunity. And in some ways the Chinese have made it slightly easier for us. Hold on a minute Chinese bloggers, let me explain.

The closing ceremony was absolutely in keeping with everything I have seen in Beijing over the last three and a bit weeks: staggering in scale, perfectly choreographed, visually stunning and absolutely on time.

The drum carts, the heavenly drums that looked like giant cheeses, the acrobats on rotating poles, the "memory tower" with its 396 performers on wires, the fireworks, Jackie Chan's singing (especially that), will live long in the memory. I really can't imagine London, or any other city, topping that.

And it was also done with genuine enthusiasm and sincerity. London should take special note of that.

But these were also emphatically China's Games. The ambition and expense on display here is pretty unsustainable, if not for China, then certainly for the rest of the Olympic movement. And the International Olympic Committee knows that.

The magnificent venues, the remarkable infrastructure improvements, the stuff-the-expense measures taken to improve the city's air quality, the mobilisation of an army of smiling student volunteers: China has risen the bar to such a height that I don't believe any other city in the world could or should try to reach.

So that bar must remain where it is. The records these Games have set should be Beijing's forever. It deserves them, as London 2012 boss Seb Coe said on Friday, it is difficult to know what more the Chinese could have done.

But now the Olympics must draw a line under the big studio era and think humbler, smaller and smarter. The Olympics needs to think about the footprint it leaves behind when the circus moves on, and it needs to reassess what it is trying to celebrate.

That is London's opportunity. The budget will be under half what they have spent here and that is only right and proper. Every host city has a story to tell when they bid to stage a Games, London's story is different to Beijing's. Not worse, not better, different.

And we got an early glimpse of just how different that story is during the eight-minute handover segment. I'm not entirely sure we nailed it but it was a good first stab. I'm glad we realised there was no point trying to match the hosts' Cecil B. DeMille meets Cirque du Soleil approach. After all, it's not our party yet and I don't think we do that kind of thing very well.

So what we offered up was a Carry On caper with added cheese and a dollop of celebrity. I have a feeling it will get crucified in the papers on Monday but I hope not.

If I had a criticism it would be that it was a bit too knowing at times, a bit too cute. And because it was on such a small scale, it lacked impact in this arena...but then, what could we have really done in just eight minutes?

On the positive side, Jimmy Page's opening riff was the loudest thing we heard here all night, "Whole Lotta Love" was the best song ("Beijing, Beijing, I love Beijing" being the worst) and Leona Lewis looked lovely, if a little precarious on that pole.

And David Beckham got the biggest single cheer of the evening, and the dancer who caught the football he somewhat shanked into the crowd will have the greatest story to tell his grandchildren. But I do wish we wouldn't play up to the "it always rains in London" stereotypes so much. It's the same weather as Paris!

But for me, the real highlight of the closing ceremony was watching the athletes, which, if you think about it, is only right. Watching Yao Ming being hounded by the other Olympians for a group photo was one of the funniest things I've seen in a long time. It's not like he could hide.

I was desperately trying to pick out the Brits but it was tough, there were at least a thousand dancers between me and them. I did spot Chris Hoy, though, wandering about with his camera looking a bit embarrassed, and it was good to see Shanaze Reade chatting and smiling, despite her crutches.

She was supposed to be one of the London commuters that overtook the bus on their bikes but knowing her luck a white van would have pulled out of the mixed zone and sent her flying into the bus stop.

It was also great to pick out little vignettes on the stadium floor - three tall Sudanese distance runners chatting to a group of blondes from Ukraine, tipsy Aussies clowning around with the dancers, Tom Daley sitting on somebody's shoulders like he's a 14-year-old boy...oh hold on, forget that one - because it helped remind me that the athletes are at the heart of all this. They're the real stars of the show.

So well done, Beijing. You've put on an amazing spectacle and I think you've helped change your country's story for the better.

But, in the words of the man I thought Boris was trying to impersonate on the red carpet, don't panic, London! Just remember to keep it simple and keep it fun and we'll be all right on the night.

And with that I'm off to pretend to run through the finish line like Usain Bolt.

Matt Slater is a BBC Sport journalist focusing on sports news. Our FAQs should answer any questions you have.