"Sport is the only human institution based on idealism - it's survived 33 centuries because of that. If it was simply competition it wouldn't have lasted 33 weeks. Anything which is not based on ethics cannot be called sport. If it's a corrupt environment, we can't invite our children into it.

"We must be jealous of that ideal if we're going to bring them into it and every time we see anyone breaking that ethic we've got to jump on them. Otherwise we lose the precious jewel that we hand to the next generation."

Wise words, noble sentiments, and the fact they were published 16 years ago reflects just how poorly they were heeded at the time.

Now, however, with Dwain Chambers' remarkable ride finally over, it is perhaps time to reflect on what Olympic sport really means, or more accurately, what it should mean. 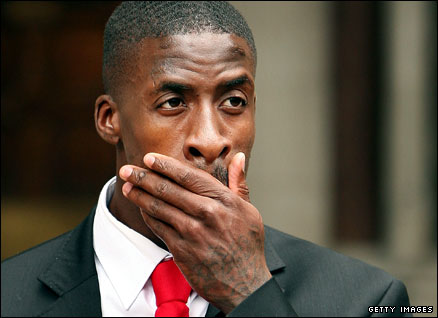 That quote comes from Vyv Simson and Andrew Jennings' famous polemic, "The Lords of the Rings: Power, Money and Drugs in the Modern Olympics", and they belong to former athletics coach and BBC presenter, the late Ron Pickering.

It was also 16 years ago, during another Olympic year, that the British Olympic Association (BOA) added by-law 25 to its statute book.

Incensed by what he saw as elite sport's credibility ebbing away with each new doping scandal, BOA chairman Sir Arthur Gold decided to put Great Britain on a lofty moral pedestal.

From that moment forth, all British drugs cheats would be banned from ever representing their country again at an Olympics.

And so they remain...but only just.

When Gold took that principled stance he hoped Britain would be setting an example the rest of the world would want to follow.

He was wrong - and hasn't sport suffered as a result. While Rome has burned, too many of sport's numerous Neros have fiddled.

When Chambers took his case for inclusion in Team GB at Beijing to the High Court on Thursday, he went armed with the fact that if he came from any other country other than here or China he would already be clutching his Olympic kit and credentials.

Nowhere else has matched the Gold standard. International sport's supposed moral guardians - the various associations, committees and federations - have not been much better either.

So while Chambers stays at home this summer, with only that long walk to the sunset to contemplate, American sprinter Torri Edwards, Greek star Katerina Thanou and who knows how many other drugs cheats from other nations can look forward to a fortnight in the limelight.

Recent months have seen his case take on a staggering amount of emotional baggage. To some he has become athletics' answer to Mike Tyson, the baddest man in the planet: to others he has become an unlikely hero, the victim of prejudice.

He is neither. As his ex-coach John Regis told the BBC after Mr Justice Mackay's ruling was announced, Chambers is a nice guy who made a very bad choice.

But he also said cheats cannot prosper. It was a sentiment repeated by the next two athletes contacted by the BBC, ex-swimmer Sharron Davies and Chambers' old team-mate Iwan Thomas.

Both expressed sympathy for the 30-year-old Londoner, who has won over a large section of the British public in recent months with his now legitimate performances on the track and affable nature off it, but said the judge's call was correct.

For me, this was always a very, very difficult call to make.

On the one side I could see a sport in danger of becoming as credible as pantomime wrestling. And on the other I could see a young man being punished without any chance of rehabilitation, and demonised beyond all proportion to his crime.

But it is the first view that has become more relevant, more pressing, as time has passed. And while that is unfortunate for Chambers, it is essential for athletics and sport in general. 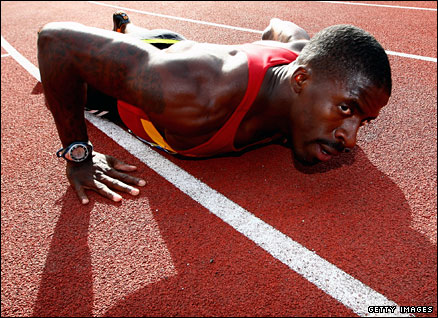 Quite simply, the sport Chambers initially returned to from his two-year suspension in 2005 is not the same sport he attempted to pick up again this year.

The seismic shocks caused by events in the US - events which have left the sport there teetering on the brink of Wrestlemania - have changed the landscape everywhere.

The irony is that from purely legal point of view, Chambers should probably be going to the Olympics.

It is clear from the early accounts of what happened in Court 76 that the ruling went against Chambers for two significant reasons: one, judges' long-standing reluctance to get involved in the parish problems of organised sport, and two, the late notice of this challenge.

The BOA played a canny game last week in persuading the court there was no time for a proper review of the by-law's legality. By postponing that review to a date which will now presumably remain forever in the future, Chambers could only ask for an injunction, which is, in effect, an emergency exemption.

But where was that sense of emergency?

Chambers became ineligible from ever competing at an Olympics for Britain again the moment his positive drugs test was confirmed in 2003. There has been ample opportunity for a proper challenge in the five years since.

But by waiting until the week before Team GB must be finalised, Chambers' case looked like a piece of legal sleight of hand, and Mackay clearly did not want to be used in that fashion.

There is also the question of strategy. Chambers' lawyers argued the by-law was a restraint of trade. That is a difficult charge to make stick when the Olympics are supposed to be about glory, not money.

No, the best argument Chambers had was the double jeopardy implications of the BOA's hard-line stance.

He had already served the penalty his sport deemed sufficient for his offence, the British by-law was a cruel and unusual sanction that punished him twice. This is the potential flaw in the BOA's position that former World Anti-Doping Agency boss Dick Pound identified earlier this year.

If any good can come from this saga it is that the rights and wrongs of the by-law have been aired in public, athletes have been asked to examine their consciences and the moral centre has held.

But most of all, perhaps now the torch Gold lit in 1992 can be picked up by the rest of the world.

It is fitting that the only country to do so already, China, is hosting this summer's Games. Olympic hosts should be held to a higher standard, they, after all, set the tone.

Let's hope that when the world gathers in London in four years' time it will be a standard shared by everybody.

Matt Slater is a BBC Sport journalist focusing on sports news. Our FAQs should answer any questions you have.