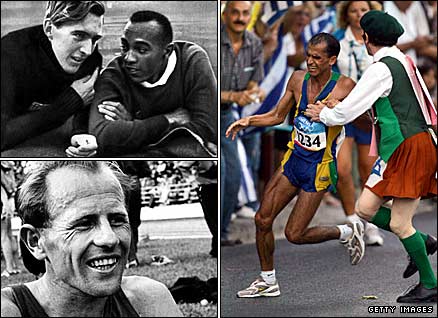 In 1964 the Pierre de Coubertin medal, named in honour of the man who founded the modern Olympic Games, was inaugurated.

The medal is given by the International Olympic Committee to athletes who have shown the spirit of sportsmanship in Olympic events and only a dozen or so have been handed out to date.

About half have been awarded to Winter Olympics competitors, but as as we are counting down to the summer version, let's concentrate on those.

Lutz Long, a German long jumper at the 1936 Games in Berlin was awarded his medal posthumously after he advised Jesse Owens - a black American - during a competition watched by German leader Adolf Hitler.

Owens had failed his first two qualifying jumps and was in danger of going out, before Long told him to simply jump from a couple of inches behind the take-off board.

The idea worked and Owens went on to win gold. He said: "It took a lot of courage for him to befriend me in front of Hitler.

"You can melt down all the medals and cups I have and they wouldn't be a plating on the 24 carat friendship that I felt for Lutz Long at that moment."

Czech runner Emil Zatopek received his award for his performance at the 1952 Olympics where he won the 5,000m, 10,000m and marathon races.

Canadian sailor Lawrence Lemieux was given the IOC's highest honour after abandoning his own finn class race, when in second place, to aid two sailors who had capsized in the 470 class during the 1988 Games.

Then president of the IOC, Juan Antonio Samaranch, said: "By your sportsmanship, self-sacrifice and courage, you embody all that is right with the Olympic ideal."

The most famous recent addition to the club is Vanderlei de Lima, the Brazilian marathon runner who was so cruelly denied victory at the 2004 Olympics when he was attacked by a protestor - a defrocked Irish priest - with a little over six miles remaining.

De Lima only lost about 20 seconds due to the incident, but it threw his momentum and he had to settle for third, but he did a little victory dance before he crossed the finish line and his sportsmanship was rewarded.

But who else is deserving of a medal?

I've got one to get you started - British fencer Judy Guinness embodied the Olympic fair play spirit at the 1932 Los Angeles Games.

Guinness pointed out to officials that they had missed two touches scored against her by Austria's Ellen Preis in the final - it cost her the gold medal.

Peter Scrivener is a BBC Sport Journalist. Our FAQs should answer any questions you have.

React to comment, analysis and opinion from BBC Sport experts at Beijing's Olympics and Paralympics.

This is a Flickr badge showing public photos from the BBC Sport Olympics group pool. Make your own badge here.

Read all of our countdown blogs

Do you have what it takes to excel at Denise Lewis' heptathlon?