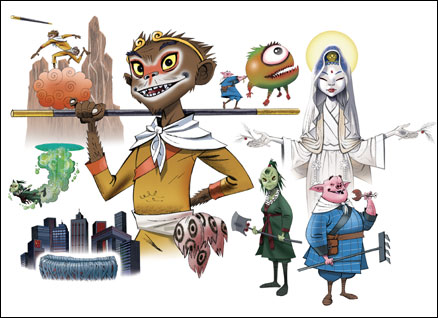 A monkey is going on a journey to the East, and he wants you to come with him, because he's the figurehead for BBC Sport this summer as we head towards the Beijing Olympics.

Monkey and his mates Pigsy and Sandy are not your average candidates to star in an Olympics campaign so how did it come about?

And how did the men behind Gorillaz - Damon Albarn and Jamie Hewlett - get involved?

Think back to events in Athens, Atlanta or Barcelona and the usual image is gold-infused slow-motion footage of athletes, faces contorted through competition, jubilation and exhaustion - a bit like this.

That was before former Blur frontman Albarn and Hewlett - who was responsible for cult comic star Tank Girl before the Gorillaz characters - came along.

The concept is based around Journey to the West, a famous Chinese novel, published in the 1590s and considered one of the four most important works of fiction in China's history. It follows a monk with several disciples, including a monkey, as they battle increasingly fierce demons on a quest to retrieve Buddhist scriptures for China.

"The idea is that you tell the entire story of Journey to the West in a two-minute opening sequence, which is basically them on their way to the Olympic stadium," says Hewlett.

The monkey would have made a superb Olympian - he has incredible strength and agility, performs sensational acrobatic feats, and he's pretty quick-witted to boot. Plus he's got the kind of positive mental attitude Linford Christie could only dream about.

If you're above a certain age this monkey talk may be triggering some great telly nostalgia. I've spent the morning dealing with colleagues humming bits of the soundtrack to Monkey - which, I am told by misty-eyed superiors, was an incredibly popular show on BBC2 in the late 1970s.

Japanese actors played all the parts with the audio dubbed into English. Having heard the theme tune, which introduces our hero as "the punkiest monkey who ever popped", I can see the appeal.

If you were glued to this 30 years ago, you were not alone - this Facebook group dedicated to the show has 30,000 fans. So the Journey to the West story is doing well to have survived two cultures, half a millennium, and comedy dubbing. Monkey's next challenge is the journey back.

BBC Sport executive producer Jonathan Bramley is a key mover behind Monkey. Speaking on the phone from Beijing, where he was scouting out the studio location for the Games, he told me: "Monkey's journey to the West becomes a journey to the East.

"Monkey and the characters will travel across China to Beijing.

"While they will use magical powers to fight off various monsters and demons, they'll also use all sorts of Olympic sports as well. So Monkey might use gymnastic powers, Pigsy will be hurdling and Sandy uses taekwondo."

You'll be seeing Monkey across TV, radio, online, mobile and interactive coverage of the Games from BBC Sport.

Monkey is also part of the BBC marketing campaign and will be on air in mid-July as the final countdown to the Games begins.

The finished product will be as much about the music as the animations, but nobody is giving away any sneak previews for the time being.

"Olympic theme music is always one of the important roles for the Olympics," Jonny explained.

"The theme music can be quite iconic, it can define the major events - a bit like Nessun Dorma for the 1990 World Cup. Selecting the right music really adds to the Olympic coverage.

"We needed something with a good, classical Chinese element to it, but something that wasn't too clichéd, with a modern feel and quite energetic."

So how did Jonny get the Gorillaz boys involved? It turns out the idea was born at the Winter Olympics in Torino.

"One of the musicians we've worked with before, a guy called Mike Smith, has done a bit of keyboards for Gorillaz," he says.

"The whole idea was intriguing. They're hugely successful and very contemporary, and we like to refresh our coverage and attract new viewers."

It is probably fair to say not everybody will expect their gold-infused Olympic heroes to be jumped by an upstart Monkey. Jonny acknowledges the campaign is going to give people more to think about than Olympic title sequences of years gone by. (Des Lynam fans will remember Barcelona 1992).

"We're definitely going in a bit of a radical direction. Some people might think this isn't the BBC but we're trying to make a mark, a statement.

"It's a little bit different and hopefully it'll capture the essence of what we think the Olympics is all about, and maybe wake a few people up.

"For younger viewers not instantly attracted to the Olympics, they might think twice about it."

You can find out more about Monkey's next journey over the coming months, both on the BBC Sport website and on sites like Facebook, Bebo and MSN.

Ollie Williams is a BBC Sport journalist. Our FAQs should answer any questions you have.

React to comment, analysis and opinion from BBC Sport experts at Beijing's Olympics and Paralympics.

This is a Flickr badge showing public photos from the BBC Sport Olympics group pool. Make your own badge here.

Read all of our countdown blogs

Do you have what it takes to excel at Denise Lewis' heptathlon?