From pub to podium: inventing your way to Olympic gold

Worple Way is an unlikely place to find the British Olympic team's latest recruits: it's a back street in the London suburb of Richmond, boasting no more than a couple of pubs and some nice floral arrangements.

But then, the recruits themselves are pretty unlikely. A toy inventor and a part-time tree surgeon have been given the green light to take some of Britain's Olympic hopefuls to the next level.

Along with two friends, they have won a competition run by funding body UK Sport to find technical innovations that can gain Britons the edge over their rivals at the London Games in 2012. And they won it by sitting in the pub.

Can four friends invent their way to Olympic gold?

"When you're coming up with ideas, it takes a certain person to not instantly resort to a negative," says Charlie Ashworth, who works in patent law by day and invents toys in her spare time, as we chat in the White Horse.

"But we're a handpicked team of people that we know don't do that. That's why this works, there are no pressures and constraints of being in an office, a boardroom, an artificial situation. We just have a drink and a chat."

Ashworth heads for the pub with sometime tree surgeon Stuart Pallant and their friends Mark Hester and Julian Swan each week. The quartet dub themselves "the Imagination Factory", but the name belies their ability to deliver the goods at a serious level.

All four have experience inventing things: Pallant and Hester design prototypes while Swan is a product design engineer. Normally, their pub sessions boil down to coming up with new ideas for toys - or, more recently, new types of pizza and beer.

However, some months ago they spotted an advertisement for UK Sport's competition, Ideas4Innovation, and got thinking. By the time the Dragons' Den-style interviews for finalists were held in July, our four protagonists had whittled down a list of 40 ideas to just four, two of which had the judges buzzing.

"We had to be quite ruthless," explains Swan. "We said to ourselves, is each idea a quick win? Do we understand the technology enough? Is it novel? And can we implement it?"

Pallant adds: "And so we thought about the 4x100m relay in athletics. The main issues there were shown in the European Championships (where the British men's team got into trouble with the baton). The changeover period is the point which can win or lose a race. How do you make the changeover so smooth that there's no time lost at all?

"We knew you wouldn't be able to use anything during the race itself so it'd have to be in training, a way of enhancing the runner's judgement of incoming speed. They have to know exactly when to take off and at the moment, all they do for that is put bits of tape down on the track."

Richmond's very own A-Team of ideas got to work, and soon rigged up a prototype using a butchered Nintendo Wii controller. Run with the controller's components strapped to your wrist and, at the top and bottom of your stroke, the device sends a bleep to the ear of the next relay runner, to help them judge their team-mate's speed and synchronise with it. Theoretically, the changeover then has much more chance of going to plan.

"At the moment, they film endless changeovers and take it back to the lab," says Ashworth. "What athlete's going to sit there studying his changeover? They've got better things to do. We tried to think about what the athlete needs, not collecting data. It's like Guitar Hero for 100m runners, it's all about getting the right rhythm." 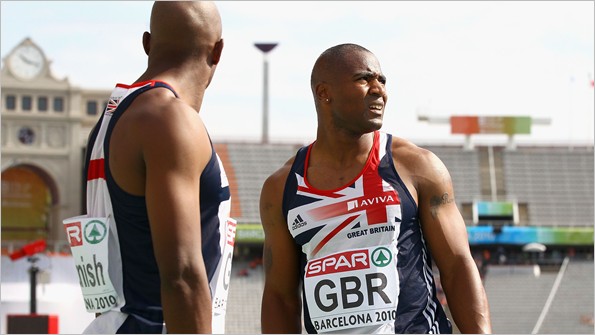 UK Sport were impressed enough to wave that idea through to the final - but it hit a stumbling block when they questioned if runners would end up depending on it too much, so that they were lost without it during the race itself. "We hadn't thought of that," admits Hester.

But their second idea, involving swimming, was a belter. It was so good, UK Sport have awarded them a four-figure sum to take it forward and get something developed in time to have an impact before London 2012.

So good, in fact, that I can tell you absolutely nothing about it. Like the other two ideas which won this year, it is a secret. And when I press Dr Scott Drawer, UK Sport's head of research and innovation, for a better answer, the man who led the competition's judging panel remains tight-lipped.

"The Imagination Factory's idea covers a wide range of swimming-based sports like triathlon, swimming, Paralympic swimming and modern pentathlon," he tells me.

"One of the other winning ideas is around training and preparation for competition, which works across every sport, we're excited for that. And there's one using novel computational techniques for water-based sports like sailing, rowing and canoeing."

That's all we get to know about the ideas themselves, lest UK Sport give the game away and ruin the advantage they hope to engineer over other nations. This competition is all about helping British athletes win, after all.

But it's about more than that. British sports spend millions of pounds every year on research and development, trying to find that extra hundredth of a second. So why does UK Sport feel the need to go to "a bunch of plebs in the pub" - as Swan modestly put it when I met them - for answers?

"We don't know everything and there are some really creative people out there who have ideas which can help," explains Dr Drawer.

"History is littered with examples where individuals outside sports have seen an opportunity and made a difference by looking at it with a fresh pair of eyes. They have different experiences from different disciplines.

Chris West won the competition in 2008, the first year it was held, and he is rewarding that faith. West, a PhD student at Brunel University in Uxbridge, has designed a training aid to help Paralympic athletes whose spinal injuries have impaired their cardiovascular systems.

Inside the lab with Chris West and Ross Morrison

Again, that's all we get to know about it. Apparently, if anyone says the two words which define this training aid out loud, it's so obvious that any other country could set to work copying it. The mind boggles.

"Our proof of concept is finished and now we're putting it into practice across a range of Paralympic sports," says West.

"The degree of improvement is very large and the idea could be taken up by other nations quite quickly and easily if they were to find out what it is. So, given the margin of improvement we can get, we're keen to keep it within GB for the time being."

British wheelchair rugby player Ross Morrison has been a regular in West's laboratory for the past few years, helping him fine-tune the training device. Some of the tests Morrison and others have endured as part of it - such as an invasive procedure involving a balloon being sent down the throat into the lungs - sound a little frightening to the layman, but if the outcome is more chance of winning, Morrison is up for it.

"It's an edge. And, at the elite end of sport, there are tiny margins that can be the difference between gold, silver or not medalling at all," he says. "It's a definite edge our competitors don't have and that's a great feeling to take into a competition.

"In all the testing we've done it's improved respiratory and cardiovascular responses, which means you can train and play harder, longer and better. You definitely notice a difference after you've used it.

"It's a big thing to be a part of. I'm proud to be involved in research that has an impact on my sport and others too. It could directly impact on British performance in 2012, which is what we're about. We're about winning gold medals."

Now the same chance has fallen at the feet of our Richmond pub-goers. Their next step is to put down the beers and turn their swimming idea into a reality, knowing their work may help put British swimmers on the podium in 2012.

"It's a bit of a lottery ticket," says Ashworth. "it's quite exciting to think how far we could go with having the right idea at the right time."

Swan interrupts: "I'll be honest, I think we could go far with this. I am sports mad and I would love this to go somewhere, I really would."

I'm Ollie, and I cover sports which don't normally hit the headlines - from archery to ice hockey. I'll be reporting on all Olympic sports (and some others!) in the run-up to London 2012. For regular updates and links, follow me on Twitter.

You can stay up to date with Ollie Williams via these feeds.