ICC leaves Ireland out in the cold

Gary Wilson, the Surrey and Ireland wicketkeeper batsman, was speaking three days before the International Cricket Council poured a gallon of industrial-strength weedkiller on the green shoots of Irish cricket, but his words are all the more poignant now:

"We beat Pakistan and Bangladesh in our first World Cup, we took down the Ashes champions in our second, we've made the fastest World Cup hundred, the highest and third-highest World Cup run chases and we have the youngest World Cup centurion. Anyone who says they don't want to watch Ireland in the World Cup is lying."

Wilson makes a compelling case, and his final point is particularly telling.

How can the board members who voted to exclude Ireland and their fellow associates justify their decision? It is hard to believe they genuinely believe Ireland are not good enough to play in cricket's global showpiece tournament. Who for that matter, reading this blog, will say they do not want Ireland in the 2015 World Cup? 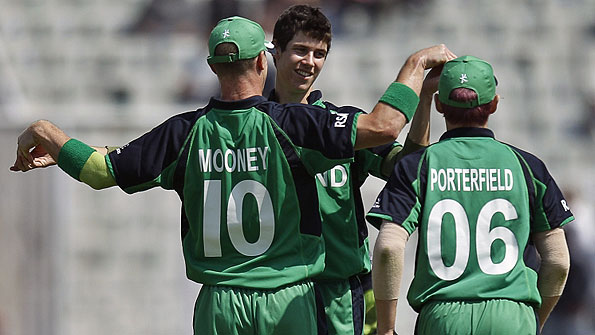 This season, a record nine Ireland-qualified players have been named in first-class county squads. They include Paul Stirling, the 20-year-old on Middlesex's books who made a century in 70 balls against the Netherlands and perhaps most excitingly of all, George Dockrell.

The 18-year-old, shrewdly captured by Somerset, is a slow left-armer of real talent who dismissed Andrew Strauss, Sachin Tendulkar, MS Dhoni and Ramnaresh Sarwan at the World Cup.

Then there's Graeme McCarter, also 18, yet to break through to the Ireland senior team. He's a Londonderry-born fast bowler who has been compared to both Brett Lee and Angus Fraser and is contracted to Gloucestershire.

While Ireland are made to do without, Zimbabwe are guaranteed a 2015 World Cup spot despite not having played Test cricket since September 2006 and sitting one place below Ireland in ICC's own one-day rankings at 11th.

While they did beat Canada and Kenya efficiently enough in the World Cup, Zimbabwe remain a workmanlike side who at no stage worried any of the top four teams in their group.

When Zimbabwe met Ireland in the 2007 World Cup the teams tied, and the most recent meeting between them was a 20-run Irish victory. So, how can it be that Zimbabwe have a golden ticket for 2015 while Ireland do not even have the right to qualify?

The guarantee to the southern African nation, historically a staunch and important ally of India (and thus the Asian bloc) within the ICC boardroom, smacks of messy collusion.

One might not have had to speculate about all this had the ICC chosen to explain more about its 2015 decision. But instead, it wasted far more words congratulating itself on "the many important achievements" from the tournament that had finished 48 hours previously.

When a call and an email to the ICC's offices in Dubai went unanswered, I instead contacted the ECB to try to establish which way its chairman, Giles Clarke, had voted in Mumbai. But Clarke was en route back to the UK on Wednesday and not available for comment. The ECB said it would attempt to clarify its position as soon as it was able to do so.

What can be said categorically is that despite cutting out four teams from the 2015 format, the overall length of the tournament will not be significantly reduced from the 43 days that most felt was too long in India. That is because of the terms of the deal with the World Cup broadcaster ESPN Star Sports. 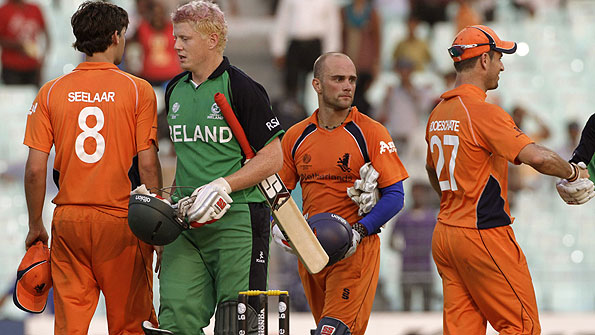 A 10-team tournament in four years' time had been in the offing for some time, and Australia and New Zealand, the next World Cup hosts, confirmed that was indeed their preference when the ICC's executive board members met around the sparkling mineral water in the Mumbai's Taj Mahal hotel on Monday.

But instead of encouraging the likes of Ireland and the Netherlands - which they could have done by, perhaps, offering six automatic spots and four more via a qualification process - they cut them out of the deal altogether, effectively turning their flagship tournament into a private members' club jamboree.

The story has continued to move on. The ECB has emailed county chief executives with Ireland players on their books to remind them to be careful when using Twitter accounts to vent their frustrations.

It has not, as has been reported in some quarters, issued a blanket ban on comments. Nevertheless, the indignation and hurt felt by the Irish is not surprising.

This was, after all, the team that had produced the single most extraordinary performance in the 2011 tournament. Kevin O'Brien's scintillating century allowed the Irish to chase 328 to beat England on a heady night in Bangalore, having at one stage been 111-5.

Cricket Ireland has vowed to fight the decision, and there has been some suggestion that they could try to present a case to the Court of Arbitration for Sport in Switzerland, a body more used to settling football transfer disputes and doping matters.

Importantly, the ICC's actions should not be seen merely as an injustice to Irish cricket. It is also a damaging blow, for instance, to Afghanistan's dreams of ever competing in a World Cup, to the Dutch of course, and also Scotland, Kenya and Canada.

But if the ICC is hoping everyone will quietly lose interest in this story then it may have to think again.