At 0715 BST on Thursday, an enthusiastic colleague woke me up with a text message: "Hughes dropped in favour of Watson. Enjoy your breakfast!"

Three hours later, as it became clear that play would not start on time for the third Ashes Test at Edgbaston, the story of how Phillip Hughes, the 20-year-old opening batsman, had been left out of the Australian team was suddenly the talk of the town.

By posting a message to his 3,000 followers on social network site Twitter - "Disappointed not to be on the field today," he told them - he had apparently divulged some of Ricky Ponting's closely guarded strategies concerning team selection. 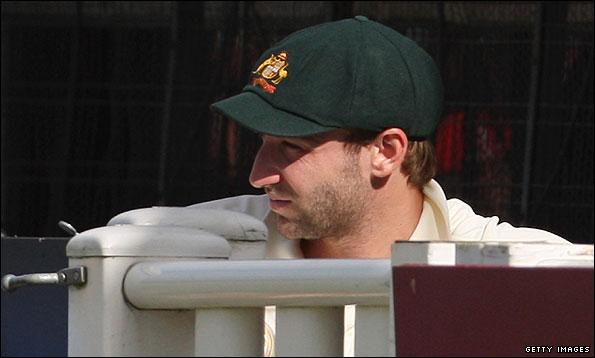 That was not, strictly speaking, the case at all. The Australian newspaper had by then already published an exclusive, quoting "sources close to the team" with the news that Hughes had indeed been dropped, and replaced by Shane Watson.

The veracity of their scoop was confirmed when, with the toss finally taking place at 1630, Ricky Ponting announced Australia's starting XI.

Except, as one shower after another lashed the Birmingham area during the morning, and the groundstaff spent most of the afternoon mopping it all up, the story was not about some good investigative journalism, but Hughes's over-zealous tweeting.

His agent appeared on TV and explained: "We get the Twitter from Phillip and I feed them into our IT guy," a bizarrely complicated process that completely misses the point of Twitter's spontaneity. The agent accepted the blame, saying he had got confused about time differences.

In early afternoon, I saw a sheepish-looking Hughes quietly sipping a cup of tea as he toured the perimeter of the ground with Brad Haddin acting as chaperone. Understandably, all interviews with journalists and chats with fans were politely declined.

As well as having to deal with the disappointment of being axed despite averaging 69 from his first three Tests prior to this series, Hughes was ticked off by Cricket Australia. On the plus side, Matthew Hayden - commentating on Test Match Special here - has offered to provide an unofficial counselling service for the young New South Welshman.

With Watson making the best possible use of the 30 overs available to hit a sparkling unbeaten 62, just 16 runs away from his best score in Test cricket, Hayden may have a busy summer in front of him.

Meanwhile, the tweets provided by England's Graeme Swann and James Anderson will not face censorship by the England and Wales Cricket Board, a spokesman revealed. He did, however, add: "Players understand their responsibilities when posting information on social networking sites."

Swann's contributions are often an entertaining read - including this one after England's shock defeat to the Netherlands in the ICC World Twenty20: "Wondering what was in those cakes the Dutch gave us as pre-match nibbles..."

As a fellow tweeter - is that the right word? - I hope that cricketers and sportsmen in general do not get discouraged from the network. In a world of stage-managed press conferences, where exclusive interviews are harder than ever to obtain, Twitter is a welcome diversion.