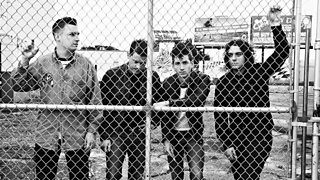 Without months of speculation, rumour and questions, Arctic Monkeys quietly uploaded their new music in the form of Do I Wanna Know? yesterday and instantly made it available to the world. So this Sunday on Now Playing, we’re asking you to pick the Ultimate Arctic Monkeys Playlist.

After blowing everyone away with the much-hyped I Bet You Look Good on the Dancefloor eight years ago (yes, that was eight years ago), they’ve gone on to release four No. 1 albums and are set to headline Glastonbury next weekend – which you’ll be able to hear on BBC 6 Music.

Since their instant impact, the Arctics have continued to inspire bands like Palma Violets and reflect some of Britain’s greatest rock and roll acts such as The Who and The Beatles – but what do you think we must include in the Ultimate Arctic Monkeys Playlist?

How about:
* Your favourite Arctic Monkeys track, be it a single, album track or b-side
* People they’ve worked with from Josh Homme to Dizzee Rascal or Simian Mobile Disco’s James Ford
* One of their side projects like Last of the Shadow Puppets or Mongrel
* Other artists on their Domino label such as the also recently-returning Franz Ferdinand, Pavement, Hot Chip or Four Tet
* Or simply the best of Yorkshire

As ever, you choose the music so let us know what you want us to play by commenting on Facebook, here on the blog, Tweet #Arctics6Music, email us at nowplaying@bbc.co.uk or add a track into our collaborative Spotity playlist.
Comments
View the comments for this blog