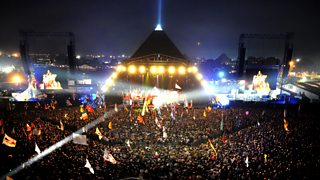 Let’s be honest if you’re reading this you probably aren’t going to Glastonbury. But don’t worry. You can avoid the mud, have a shower and not have to stress about your tent blowing away - and still listen to your favourite bands with us by helping create the Ultimate Glastonbury Playlist.

Now in its fifth decade of existence, Worthy Farm has been an annual pilgrimage (with the occasional fallow year) for music lovers all over the UK and beyond, and has created some of the greatest musical moments these shores have been lucky enough to be party to.

For the first time you’ll be able to listen to and watch the major stages at this year’s event across four radio networks – including BBC 6 Music – the Red Button, online as well as on mobile and tablet devices.

But for two hours on Sunday evening we want you to let us know your favourite Glastonbury memories so we can create a playlist befitting this massive musical event.

It could be:
• Your favourite Pyramid stage moment, like Stevie Wonder singing Happy Birthday to Glastonbury, Blur’s triumphant return, Jay-Z silencing the critics or The Smiths making the festival ‘cool’
• How about a surprise guest who blew you away? In recent years there have been the likes of Pulp and Radiohead and of course, Fatboy Slim, under a different guise each year
• Maybe you’ve discovered a band at Glastonbury who have gone on to be your new favourite band?
• Or, if you were going to the event this time around, who would you want to see?

As ever, you choose the music so let us know what you want us to play by commenting on Facebook, here on the blog, Tweet #BBCGlasto, email us at nowplaying@bbc.co.uk or add a track into our collaborative Spotity playlist.