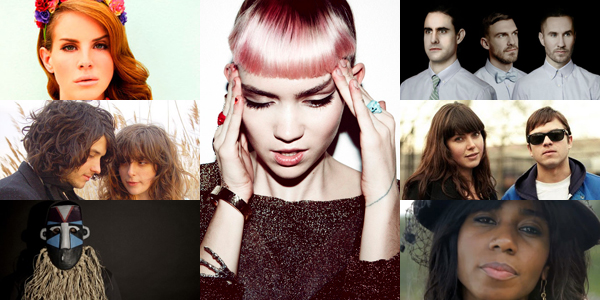 Canadian songstress Grimes has topped the 2012 Music Blog Zeitgeist after being the most talked about artist of the year so far according to Hype Machine and their analysis of 863 key music blogs from across the world.

They looked at what they’ve been writing about and calculated the number of blog posts written about each and every artist, which put Grimes on top of the pile.

Tom said: "One of the sheer delights of Now Playing has been our close relationship with a wealth of wonderful new music blogs. The highpoint to date is our collaboration this weekend with the mighty Hype Machine - which has got me almost childishly excited. The graft, enthusiasm and musical expertise of the world's music bloggers has led to a new world of possibilities for gifted independent artists.

"It's largely thanks to bloggers that artists no longer need business cash, industry contacts, or even an outrageous amount of luck to get their music heard. These days, all they need to be is good."

And on the No. 1 artist he said: "The rise and rise of Grimes has been breathtaking. She's one of those artists whose work is perfectly attuned to the moment - effortlessly capturing the imagination of a global audience.

"But much more to the point she's also very, very good indeed."

See the Top 25 artists in the 2012 Music Blog Zeitgeist and let us know what you think of it, either on this blog or Tweet using #Blog6Music and add to our Spotify playlist of your favourite tracks from 2012 – any surprise inclusions? Anyone you thought would be there?