Be careful what you wish for

To think that elections used to be boring. Predictable. 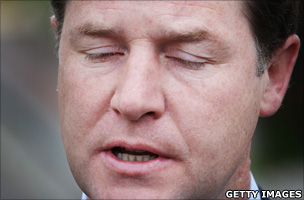 Just like the general election held exactly a year ago - today produced results no-one predicted with consequences which are totally unpredictable.

Many may have foreseen the drubbing Nick Clegg's Liberal Democrats would receive but few foresaw its scale - losing not just to Labour in the Northern cities, not just to the SNP in Scotland but - irony of ironies - to their coalition partners the Conservatives in parts of the South.

And who would have dared predict that David Cameron would be out tonight celebrating councils and councillors gained - if, that is, he hadn't decreed that his party must not be seen to gloat.

And all this before the final results of a referendum which looks certain to bring suppressed grins to Tory faces and further gloom to Liberal Democrats.

So what now for the coalition? The talk is of a more business-like, less chummy relationship; of some disagreements publicly aired rather than always privately resolved; of Liberal Democrats fighting - their chosen word - to avoid what Nick Clegg called this morning "a return to Thatcherism".

How will that work? No-one can possibly know. Just as no-one can know how the new Scottish government will manage with a parliamentary majority committed to delivering independence whilst public opinion shows no appetite for it.

David Cameron and Alex Salmond are the two clear winners of today but they may soon be pondering that old Chinese proverb - be careful what you wish for.