The prime minister went to a hospital to win over NHS staff. He asked his audience: 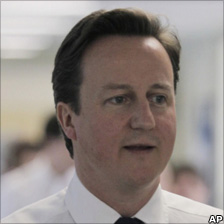 "If you were health secretary for the day and had a magic wand and could change one thing what would it be?"

That was exactly a year ago. Funnily enough it was not a question he repeated on today's visit.

Speaking to today's audience after the event some would undoubtedly have suggested that he drop his proposed NHS reforms altogether. Some welcome the idea of putting doctors in charge of buying and planning health care but others were concerned that the plans would fragment the NHS leading to competition instead of co-operation.

Today we heard little about what changes ministers will make to its reforms. We heard a lot of protestations of love for the health service and promises to listen.

With over a million people working in the NHS - many of who are admired and trusted members of their local communities - David Cameron has clearly concluded that he has no chance of winning over the public if he can't win over the staff.

His choice of Professor Steve Field - the former head of the Royal College of GPs - as listener in chief is revealing. Field broadly backs these reforms. His job is to do what the health secretary has so far failed to do - make them palatable to NHS staff. In doing so he will be ignoring the views of his successor at the College who opposes the government's plans.