AV-ing a go at Clegg

He wasn't there this morning. Not at the Yes or No event. Yet the shadow of Nick Clegg could be felt at today's battle of the political odd couples. 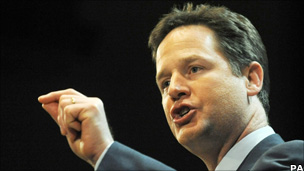 AV, the prime minister claimed, would make coalitions more likely and that would mean politicians would make manifesto pledges they knew they couldn't deliver. Who and what could he have been thinking of? His friend Nick and those tuition fee rises perchance?

David's new friend John Reid - the basis of a new Blairite alliance perhaps - suggested that any change in the voting system should be in the public interest and not the "narrow self interest" of "losing parties" which hope "to turn losers into winners" as if by magic. Who could Dr Reid have had in mind? He didn't say. He didn't need to.

Over at the Yes event the name Clegg could not be avoided so easily. Ed Miliband insisted that this was not and should not be a referendum on Nick Clegg - the man he refuses to share a platform with. Vince Cable - Clegg's AV understudy today - insisted that his leader was not a liability in this campaign.

The No campaign beg to differ - and plan to milk this liability for all it's worth. So damaging, they believe, is the spectre of Clegg to the Yes campaign that they don't even need to name him in order to ensure that the man who wasn't there today is the man very much there in voters minds when - if - they vote in the referendum.