The prime minister described him as "excellent". He took "full responsibility" for what had gone wrong with the special forces' mission to Libya. He even used questions about the foreign secretary's alleged incompetence to deliver a wounding blow to Ed Miliband - pointing out that there was only one person, the Labour leader himself, who'd recently knifed a foreign secretary. But where was William Hague - the man whose downbeat performances have fuelled endless chatter in the Westminster village about why he's lost his mojo? 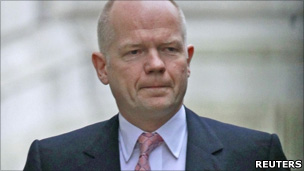 The answer is that he was somewhere even more important - briefing Her Majesty the Queen on Libya.

Having seen dozens of foreign secretaries over the course of her reign it would be fascinating to know what she said to him - whether she offered words of comfort. I have a hunch that he will have told her that Britain faces being damned if we do intervene - for not learning the lessons of Iraq, for putting more British soldiers lives at risk, for stretching the armed forces even more than they are already ...etc - and damned if we don't - how can we standby whilst Gaddafi slaughters his people, won't other dictators learn that they can do what they like without fear of international reprisal, are we diminished on the world stage.

Perhaps that's why the foreign secretary doesn't look like he's having fun.

PS A brief note by way of a mea culpa to the policeman who stopped me on the way into the Commons today, and to some of his colleagues who've been in touch. London Met police STAFF not, as I said on the Six O' Clock News last night, London Met police OFFICERS qualify for double time rates for Sunday working. The perils of live reporting - it's a fair cop...