As Colonel Gaddafi's promises to crush the uprising in Libya echo grimly around them, diplomats at the United Nations will begin discussions on a resolution which they might vote on this week. On the other hand, they might not. 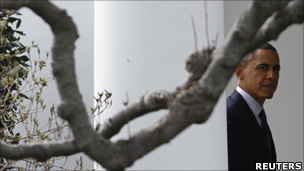 On Monday William Hague said the world had now reached the point of decision. It might, perhaps, have been more accurate to say that the world had extended the period of indecision.

Already the political blame game is beginning. David Cameron is trying hard to hide his frustration with President Obama. I'm told that he's not always succeeding.

The new French Foreign Minister Alain Juppe is not being so diplomatic. I now have the full version of his statement to the French parliament yesterday in which he blames the EU, China, Russia but, above all, America.

"If today we are stuck, it's not only because Europe is impotent, it's because at the Security Council, for now, China doesn't want any mention of a resolution leading to the international community's interference in a country's affairs... but what about American power? What about Russian power? What's China's power over Libya?... Russia is evolving and the Americans haven't yet defined their position on Libya."

Evidence of that lack of American definition came in yesterday's White House briefing after the president met his national security team to discuss Libya. The official "read out" stated that:

"The President instructed his team to continue to fully engage in the discussions at the United Nations, NATO and with partners and organizations in the region."

No wonder yesterday's White House press briefing included questions suggesting the president was "sitting on the fence", "satisfied to follow not lead" and needed to make a decision (see transcript below). Leadership, the press pack were told by a defensive White House press spokesman, involves considering the mission, it's likelihood of success and the risks it poses.

That is the debate that will soon follow. Did David Cameron give the lead on Libya only to discover that the world was too weak, too divided, too scared of the shadow of Iraq to act? Or did the prime minister deploy his rhetoric before developing a workable plan, fail to persuade crucial allies and, thus, raise false hopes of what the world would do to help the uprising in Libya.

Q: On no-fly zone, what exactly is the US - the administration's position before the Security Council?

Mr Carney: Our position, Chip, remains that we are evaluating a number of options, military options, including -

Q: But a decision has to be made now.

Mr Carney: - including a no-fly zone. We feel that it is important that any action like that that might be taken should be done in concert with our international partners. Though the United Nations would be our preferable vehicle for that, and therefore we would look to the UN as a forum for evaluating that option. I think I mentioned yesterday that today is the deadline for the no-fly zone option to - preparations or plans to be submitted in Brussels at NATO. And I believe the NAC will review those tomorrow. So this process is moving forward.

But our position is that action like that should be considered and taken if decided upon in coordination with our international partners, because it's very important in the way that we respond to a situation like we see in Libya, that it be international and not unilateral; that it include the support and participation, for example, of the Arab League and other organizations and countries in the region.

And that is our sort of focus as we proceed with these conversations.

Q: Is the President satisfied to follow, not lead, on deciding whether to do it?

Mr Carney: I take issue with the characterization. We think it is precisely because the President believes that the best outcome in a situation like we see in Libya, as we have seen in different forms in other countries in the region, that the best outcome will come when the action taken by countries - third-party countries outside of the country where the unrest is happening - be done in consensus with international partners, precisely so that it is not viewed by those who oppose positive democratic reform as the dictate of the West or the United States.

Q: But wouldn't it be fair to say - accurate to say the United States is still sitting on the fence on this? Isn't it time to make a decision, yes or no?

Mr Carney: Well, Chip, you tell me if as an American citizen would you want your President not to consider all the implications and ramifications of taking military action.

Q: Doesn't there come a point to make a - where you have to make a decision?

Mr Carney: And I would go back to what I said to Jill, that we have acted with great haste, and we have coordinated international - led and coordinated an international response, the likes of which the world has never seen in such a short period of time. And we have - we continue to consult with our international partners. We meet - we have met with, as the Secretary of State did, with the Libyan opposition discussing new ways we can put pressure on Qaddafi.

And when it comes to considering military options, this President will always be mindful of what the mission, should it be engaged, what it entails, the risks that it poses to our men and women in uniform, and its likelihood of having the kind of impact that we set out for it to have. And that is his responsibility as Commander-in-Chief.

And I would suggest to you that that is what leadership is all about.

Q: Is he worried about, though, the bureaucracy of making this decision with our allies, that by the time a decision is made the conflict may be over? I mean, the rebels may have gone home.

Mr Carney: We are obviously aware of the situation in Libya and the events and the fighting that's happening there. Again, I do not believe that the American people would want the US President to act unilaterally in a way to engage militarily without taking careful consideration of what the consequences of that would be; what the goals of the action would be; and being, as we have said from the beginning, very mindful of the fact that the desired result here will be best achieved if we act in concert with our international partners. And that is the position he's taken, and it's the position he takes today.