Are we seeing our political future?

There they sat. Altogether. Side by side. Supporters of the government and its bitter opponents. Political enemies united by a common goal which excites few - the campaign to change Britain's voting system - but which has the potential to change much. 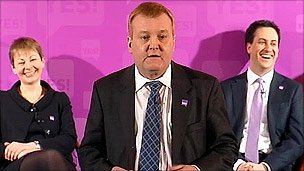 This morning Labour's leader took to the stage with the man some dream of as the Liberal Democrats next leader, the party's President Tim Farron. Alongside them the former leader, whose distaste for his party's coalition with the Conservatives is well known - Charles Kennedy.

Absent was the current leader, Nick Clegg, who couldn't be there for personal reasons - he's in Mexico, which is handy since Ed Miliband didn't want to be seen anywhere near him.

There too today a woman who could tell them all about the power of referendum campaigns to re-shape politics - Shirley Williams. The last UK-wide referendum - held in 1975 on membership of what was then called the Common Market - was the first step toward the splitting of the Labour Party, the creation of the SDP and, eventually, the emergence of the Liberal Democrats.

Now, unlike then, the referendum does not split Williams or, indeed, her Lib Dem colleagues from their leader or the rest of their party - who are united in wanting a Yes vote for the Alternative Vote (AV). Changing the voting system does not, unlike Europe, excite passions. However, it is Farron and Kennedy and Williams - and not Clegg - who today have the chance to chat behind the scenes to Ed Miliband, to swap mobile numbers or to "liaise" about future campaigning opportunities. It is they who will be pondering whether, and how, they could work together one day in government - if, of course, that was what the British electorate made possible.

Miliband will have made that all a little easier by re-stating his belief that there is a progressive majority in Britain which has allowed the Conservative to dominate government by failing to unite.

If all this feels a little far fetched or overstated it's worth recalling what David Cameron said in a documentary about the creation of the Coalition. He revealed that he had first got to know Nick Clegg when they were left together for 45 minutes at the formal opening of the Supreme Court seven months earlier. They didn't discuss a deal or start negotiations but did something much more important - they found out that they got on.

If Ed Miliband is ever to lead his country, and Tim Farron his party, they will have been wise to linger behind the scenes a little today.

Update 1218: If you're one of the many who don't know what the alternative vote is or how it works my report for last night's 10 o'clock news was made for you. It was filmed at a racecourse to highlight the differences with the current first Past the Post system.

Or you can wait for your explanatory pamphlet from the Electoral Commission which will be delivered to your home in the next week or so.