When the prime minister first spoke about a no-fly zone for Libya I wrote a post entitled Cameron's first war?: 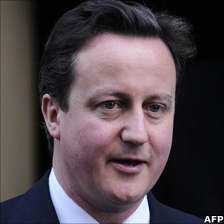 "It happens to every prime minister.

"There comes a moment when they take a decision which could lead to the loss of British servicemen and women's lives in military action."

Some of David Cameron's allies suggested I was guilty of hyperbole.

Yet officials in Downing Street, the Ministry of Defence and the Foreign Office will be working into the early hours taking the final steps to co-ordinate military action in Libya with the French, the Americans and Gulf states including Qatar and the United Arab Emirates.

Earlier a government source told me that British forces could be in action as early as tomorrow (Friday), but more likely within days.

Although Defence Secretary Liam Fox stated a few days ago that a no-fly zone could be established without air strikes, I understand that they are being actively considered.

The hope of ministers is that tonight's UN decision will persuade senior figures in the Gaddafi regime to refuse to obey orders, to turn on their leader or to defect to the opposition.

For the next few hours this looks set to be as much about psychological warfare as it is about the use of military force.

Colonel Gaddafi must decide whether to try to take Benghazi before Britain, France and the Gulf states can agree on their military strategy or whether to sit tight and provide no casus belli.

David Cameron will feel a sense of vindication tonight.

An idea which was condemned as sabre-rattling, unworkable and unnecessary has been agreed after days of intense diplomacy.

What he will also know is that the hard part starts now.