Does the government need a 'Plan B'?

You'll have to be damned lucky to deliver spending cuts deeper than any made since the World War II but, if you do try to alter your plans, interest rates will have to go up. Oh, and by the way, you might be wise to have a "Plan B" up your sleeve. 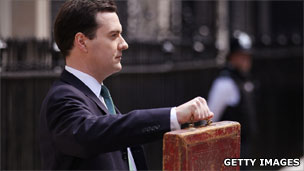 That, in summary, is the chilling message to the chancellor this morning from one organisation he must sometimes wish he could cut - the Institute for Fiscal Studies.

Their lookahead to the Budget is the latest in a string of bad economic news since the turn of the year to add to that GDP statistic, the CBI's "no strategy for growth" speech and yesterday's blow - the plan to close Pfizer's pharmaceutical factory in Kent.

In themselves none of these alter the economic weather. What's more there are other better bits of news to put in the balance - such as yesterday's confirmation that manufacturing is booming.

However, they do add up to a political problem for the coalition as the public shows sign of losing their nerve - this week's ComRes poll for ITV News showed a growing number saying ministers had lost control of the economy*.

They also raise an intriguing prospect. Will this government, like so many since the war, face an internal crisis of confidence as some ministers echo calls for a Plan B? Will Cameron in 2011 join this long list - Wilson 67, Heath 72, Wilson 76, Thatcher 81, Major 92?

* The poll suggested that almost half the country (48%) believes the government has lost control of the economy. This compares to 29% who believe that the government is in control of the economy. 52% of the public believe that the UK is on course for another wave of recession, up from 38% when asked the same question in October. In contrast, 17% of the country doesn't believe there will be a double dip - compared to 24% in October. Asked whether they think things are generally heading in the right direction, 48% said no, up from 32% when asked in October. This compares to 28% saying they think things are heading in the right direction, down from 41% in October.