In Margaret Thatcher's day the head of the CBI promised "a bare-knuckled fight" with ministers.

I remember the speech but I can't say I recall the fight it was meant to presage. If it was ever launched she won it. 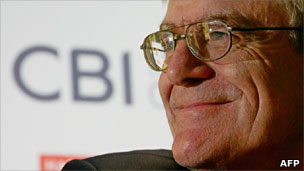 Will Sir Richard Lambert's rather less dramatic criticisms of this government's approach to business be remembered or acted on?

In a parting shot - in his last week at the CBI - Sir Richard complains that:

• "Politics appears to have trumped economics" in a range of policies.

He fears that the government's cap on immigration could stop firms hiring the workers they need. He's worried by ministers plans to scrap the age at which people are forced to retire, ministers' unwillingness to expand London's airports, proposed anti bribery laws and much besides

• Condemns the Business department and says it should become "less of a talking shop, more of an action orientated growth champion"

The speech's timing - on the eve of publication of what are likely to be sluggish growth statistics and just days after the return of Ed Balls to the economic stage - will ensure that it gains plenty of attention.

Labour's new shadow chancellor says he agrees with Sir Richard but also claims that the CBI's boss agrees with him. Really?

Sir Richard says "the tax and spending policies of the last government created a substantial structural deficit" and goes on to claim that "spending cuts and this month's VAT increase will fix the structural deficit over time".

On the deficit he says "that policy is strongly supported by business". There is, however, one line that Ed Balls can point to - "It's not enough to slam on the spending brakes. Measures that cut spending but killed demand would actually make matters worse".

The government has struggled to develop a growth agenda. It cancelled plans for a white paper on the subject. It published, instead, a list of problems rather than solutions.

The chancellor and the business secretary are seeing ministers from every department in turn to ask them what they're doing to help the economy grow. The fear in Whitehall is no longer a double dip recession but a jobless recovery.

Ministers feel that they have won the debate on the deficit. Sir Richard Lambert's speech is a reminder than they are not yet winning the debate about how to get the economy growing.