Does Labour's win tell us anything?

Let's not waste too much energy trying to impose a single national party political narrative on the varied, local motivations of thousands of by-election voters in Oldham and Saddleworth. 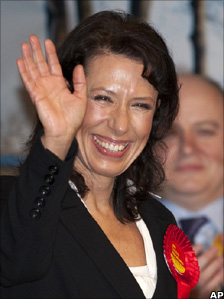 We don't know why people voted as they did. Besides, by-elections this early in a Parliament matter as much for their ability to change the political weather as they do for their revelations about the public mood.

Labour - and more importantly Ed Miliband - will be mightily relieved. Despite the widespread internal and external doubts about their leader's performance he has secured his first, vital victory comfortably overcoming an awkward hurdle - the fact that this by-election was caused by a court throwing out the sitting Labour MP for lying about his opponent. Any other result would have fuelled the narrative "Miliband in crisis". For now that story is stilled.

The Liberal Democrats - and in particular Nick Clegg - will be relieved that their result was not significantly worse. Many Lib Dem activists will recall times when they would have romped home in a seat like this in a by-election caused by Labour's abuse of their man.

However, in the face of unprecedented national hostility they will comfort themselves with the fact they not only held but marginally increased their share of the vote. A rout would have fuelled the narrative emblazoned on the cover of this week's Spectator - "The Strange Death of Liberal England".

The proof or further confounding of that claim will now have to wait for May's local, Scottish Parliament and Welsh Assembly elections and the Barnsley by-election.

So, what of the Tories? It was a poor result but one that will neither have surprised nor upset the party's leadership. Indeed, in some ways it will come as a relief for them too. David Cameron feared that the greatest threat to his coalition was a Lib Dem collapse, leading to a crisis of confidence in Nick Clegg and possibly even a coup attempt.

This morning the prime minister has a different lesser problem. A significant faction in his party will now add Oldham East and Saddleworth to their list of Cameron betrayals. That is the narrative that has been fuelled by this by-election. The alternatives - a crisis for Clegg or Miliband - could have been game changers. This result will not be.