The prime minister told the Today programme this morning that he hadn't taken a bet in years. Maybe not with his own money but he's proving to be quite a gambler when it comes to using taxpayers'. A man once attacked for his political caution has not just created the first peacetime coalition since World War II committed to the biggest austerity programme in decades. He is now embarking on the most ambitious proposals to reform public services seen in years. 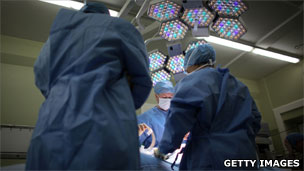 This morning he argued that he had no choice since "doing nothing could end in tears" - producing a financial "crunch" in two or three years' time. David Cameron insists that "modernisation" is not just about value for money but also about better service given the fact that survival rates for cancer and heart disease are lower here than in other European countries. He had, he said, learnt from previous PMs - for which read "Tony Blair" - who had wasted their early years in office.

Much debate on this government's NHS reforms has focused on the complex detail - abolishing Primary Care Trusts (which few people have heard of, fewer understand and fewer still care about) and giving the £80bn they spend to GPs. Some have focused on whether the Tories have misled people by promising no "top down reorganization of the NHS" while appearing to do just that. (although this article by an editor at the British Medical Journal backs the government's claim that the reforms were well trailed before the election and are an evolution of changes made by the last Tory and Labour governments.)

More important, in my view, is the philosophy - or ideology if you prefer - underlying these proposals. David Cameron made clear his view that "Choice, competition and diversity drives up standards." That is his gamble. He is counting on groups of GPs to drive down management costs and - often in partnership with private companies - to drive a harder bargain with hospitals. He believes that increased patient choice will lead to higher standards.

His critics claim that costs will actually increase as the newly created NHS bodies want their own buildings, logos and well-paid management and as the system has to keep up with new more complex accounting procedures.

All this happens at a time of an unprecedented squeeze in the NHS finances. The budget may be increasing in real terms (just) but to do so the NHS has to find £20bn in efficiency savings. Compare this with Margaret Thatcher's period in office. She was attacked for cutting the NHS but its budget increased on average by 4.3% in real terms year by year.

Now her successor's taking a gamble she never dared to take.