A change in the weather

One statistic does not a political winter make. Nevertheless, today's news that the economy shrank rather than grew in the last quarter will change the political climate.

Up until now the coalition economic argument has gone largely unchallenged. Not any more. Today's stat, yesterday's warning by the outgoing CBI director general Sir Richard Lambert that the government lacked a vision for growth and the arrival of Ed Balls as shadow chancellor will ensure that the debate will now shift from being solely about the deficit and spending cuts to being about growth as well. 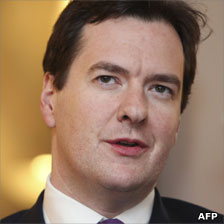 George Osborne insists that it's wrong to blame the cuts for today's figure (after all, they've scarcely begun); it's wrong to blame the VAT rise (if anything the prospect of a rise should have boosted spending in the last quarter); and the only thing to blame is the weather. He says it would be wrong to change course. His problem is that even without the snow the figure was disappointing at best. The question he'll be asked increasingly from now on is where will the growth come from.

Ed Balls warns that the VAT rise and the speed and scale of the planned cuts will make growth less not more likely. He will publicly echo ministers' private concerns about the the collapse in the construction sector, the risks of a jobless recovery and the fears of a "lost generation". Given all this the question must arise - does he now feel vindicated in his former view that even Alistair Darling's planned spending cuts would have been too far and too fast? Remember that under Labour's pre-election plans cuts deeper than Margaret Thatcher would begin this April and employers' National Insurance contributions would rise. Ed Number Two said only last week that he now accepted that plan.

Balls used, like Gordon Brown, to warn of a double dip. It became fashionable to dismiss that prospect and to say that flat growth was more likely. A double dip is now back on the political agenda again.

Ever since the coalition was created David Cameron and George Osborne have seemed to float above events as Nick Clegg and Vince Cable were battered by chill political winds.

PS. Normally we're cautious about reading too much into what is only a first estimate of growth figures. They are due for revision. However, the ONS says today's numbers focus on the output side of the economy (services, construction and manufacturing) and don't include consumer spending, which is the area that would be most affected by the weather. This means that the second estimate, due in a month, could come in even worse.