Governments with money centralise and claim the credit.

Governments without cash decentralise and spread the blame.

Those are not the views of a hardened media cynic. They are what I was told by one of the Tories' top policy wonks before the election. 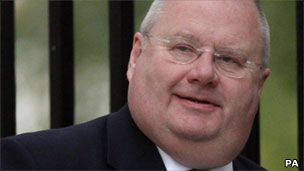 Today Eric Pickles will take money - lots and lots of money - away from local councils. He will, at the same time, promise them new freedoms to reorganise themselves and their services. The second will be regarded by many as good in itself but be in no doubt that it is connected inextricably to the first.

Pickles wants - as a matter of long-term belief as well as short-term political convenience - local people to hold local councils to account for what they spend. That is why he has highlighted the pay of council chief executives. That is why he has attacked council newsletters so as to protect and promote a vigorous local press to look for and criticise council waste. That is why he pursues populist attacks on council "absurdities" like staging Winterval instead of Christmas celebrations.

Deep council cuts are coming. The political question is who do people blame - the coalition, the minister or the council?

It's worth remembering today that the communities and local government secretary has spent his life studying how to get his way in politics. He is, these days, widely regarded as being on the Tory right. However, for his 14th birthday, Pickles - then an ardent left winger - received Trotsky's History of the Russian Revolution as a present and learned a great deal from the master of political organisation. As a young man, when he was chairman of the National Young Conservatives and the Joint Committee against Racism, he was a Tory "Wet" who took on Margaret Thatcher on the issue of unemployment and racism in northern cities. As leader of Bradford City Council in the late 80s, the "right wing" Pickles emerged to announce a five-year plan to cut the council's budget by £50m, reducing the workforce by a thrd, privatise services and undertake council departmental restructuring.

Pickles is, in short, no pushover.