Where will it all end? 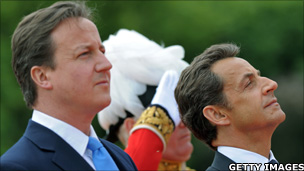 That's the question politicians never want to answer when they unveil new treaties. They always insist, as David Cameron and Nicolas Sarkozy no doubt will today, that they are merely making practical, common-sense, non-ideological policies. This, in other words, is an entente frugale forged in tough economic times.

After all, they will ask, doesn't it make sense for Britain to make use of France's aircraft carrier when ours is being repaired - and vice versa?

Isn't it sensible to save money by sharing nuclear expertise to test the safety of our nuclear weapons?

However, it will now be easier - much easier - for future politicians to ask: if we are using each other's carriers and if our men are training together, why don't we form a joint air-wing? One source I spoke to described that as "a downstream issue".

Others may say: if we are testing our nuclear components together, would it not make sense to join together to purchase the next generation of warheads? Someone in the know told me that our two countries would use different missiles "for the time being".

Atlanticists may welcome all this as proof that France is at last abandoning its hauteur towards Nato.

Europe enthusiasts may also welcome it as the first step towards a common European defence.

Sceptics may wonder whether it will end up being about much more than symbols.

The questions I have raised are not ones that will be settled this year - perhaps not even this decade. But my hunch is that the signing of two treaties between France and the UK may have very profound implications for the future.