Attacking the government for going soft on the banks is a political banker for any leader of the opposition. David Cameron did it. Now Ed Miliband has followed his lead. 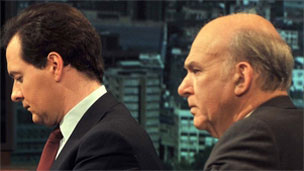 There is an added piquancy now given the scarcely concealed divide between the chancellor and the business secretary.

When Sir David Walker's plan to publish bank pay and bonuses above £1m in bands was unveiled before the election Vince Cable called his guarantee of anonymity for highly-paid bankers a "whitewash".

Now George Osborne is considering not even going that far, at least until other countries do the same. The prime minister insisted today that the government was simply following Sir David's new advice that it would be "be mistaken to go it alone."

With Lib Dems feeling growing pressure over their U-turn on tuition fees they will increasingly demand tougher action on the banks.

This is one to watch.