We may make mistakes but we are quick to correct them. So a key member of David Cameron's inner circle said to me last week. Now I know what he was referring to. The photographer, Andy Parsons, is losing the civil service job he just got and is returning to the Tory party's books. So too Nicky Woodhouse, the woman behind Webcameron. 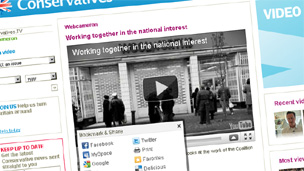 When I interviewed the prime minister, last week I asked him about the symbolism of employing a "personal photographer" at public expense at a time of massive spending cuts.

It was a description he rejected - insisting that Mr Parsons was to be used across government and would save public money. However, it was the argument which, I'm told, has persuaded him to change his mind and force them back to the jobs they've only just left.

Quick is not, perhaps, a description for Team Cameron's response to this given the amount of column inches written about it. But they will hope that it's been quick enough to ensure that the story of the photographer you're paying for doesn't enter the public's mind as deeply and damagingly as the story about the chauffeur driving a car behind David Cameron's bike - an image which came up again and again in pre-election focus groups.