First you hit "the rich"... then you hit "the scroungers". That is how George Osborne believes you prove that spending cuts are "tough but fair". 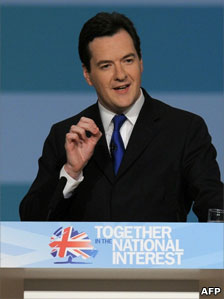 So, this morning's pledge to cut child benefit from high rate taxpayers has just been matched by a crowd and tabloid-pleasing promise to cap the amount anyone on benefits can claim. The chancellor says that no family will, in future, receive more in out-of-work benefits than the average household income of those who are in work.

What he did not spell out is how exactly this would be achieved. The stories of people receiving tens of thousands of pounds in benefit all relate to people with large families living in large houses in expensive areas - usually central London. Presumably, they will have to be evicted. If they get a job no-one will complain. If they move, the council who receives them will not be best pleased. If they become homeless, then the council they live in will have to find them accommodation which is how the problem began in the first place.

Update 1246: A government source has just told me that the chancellor's benefits cap is more a "symbol" than a policy whose implications have been fully worked out and will produce real savings.