Ever since Sir Humphrey graced our screens in Yes Minister the impression has been forged in the nation's minds that senior civil servants look down their Oxbridge-educated noses at the childish manoeuvring of their intellectually inferior political masters. 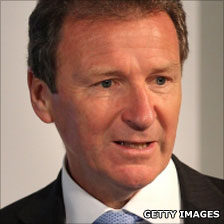 All the more striking then that Britain's top civil servant - who's called Sir Gus not Sir Humphrey - has revealed that he and his officials underestimated the capacity of our political leaders to do a deal in the national interest.

In a lecture last night, Sir Gus O'Donnell reported that his team had role-played the political negotiations in preparation for a hung Parliament:

"The good news was that we had practised handling a result that was very close to the real one. The bad news was that, under our scenario, no stable government had emerged".

Sir Gus says that their discussions broke down, unlike the ones which actually took place during those Five Days Which Changed Britain*, He goes on to ask an important question :

"So why, in the event, did the politicians do so much better? I believe it was because, in our role-played negotiations, there was one vital ingredient which was not possible to simulate - and on which, in fact, the founding and sustaining of a coalition rests. That ingredient is 'trust'.

"The coalition came together not just because of an alignment of party interest, but because politicians - contrary to the expectations of many - were able to develop the necessary level of trust in each other."

What mattered, he says, was the establishment of a process that would build mutual trust between the parties and politicians involved and hence reinforce a co-operative approach to policy development. It is trust, he concluded, which will be the key to whether the coalition thrives and, by implication, survives.

Lest you think that Britain's top official has got carried away by the excitement of the "new politics" let me relate a relevant tale from this week.

The proposals for a re-organisation of the NHS included a fundamental and little-noticed change from those contained in either the Conservative manifesto or the coalition agreement. The government now plan to give councils a major new strategic health role, examining the purchasing decisions of GPs and fitting them together with their plans for public health and social care. For the Lib Dems, this represents an important injection of democracy into the new health market. For the Tories, it allows them to propose the abolition of primary care trusts altogether instead of, as originally discussed, having to hold elections to them.

This was the result of the first negotiated departure from the coalition agreement. First the Tory Health Secretary, Andrew Lansley, and his Lib Dem deputy, Paul Burstow had to agree. Then they had to persuade the Tory Secretary of State for Communities and Local Government, Eric Pickles. Then the idea had to be taken to the cabinet home affairs committee chaired by the Lib Dem leader Nick Clegg. Finally, it had to be approved by the coalition committee which considers any major departures from the original agreement.

This is what today's Sir Humphrey sees as the restoration of cabinet government, which is one reason he and some other senior officials are going round praising politicians and not patronising them (in public, at least).

* Five Days Which Changed Britain just happens to be the title of a one-hour documentary I'm making which will air on BBC2 at 2100 on Wednesday 28 July. Please brace yourself for endless plugs from now on. After all, if Alastair Campbell can go on and on about beating me on Top Gear, why shouldn't I go on and on? (Though he also has other more interesting things to say in his Telegraph column today about the reliability of political memoirs.)