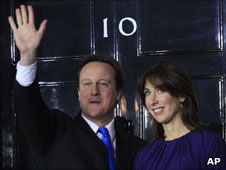 A coalition in power for the first time in 70 years.

The Conservatives ejecting a Labour government for the first time in over 30 years.

The events of Tuesday are enough to take your breath away, without the events of the previous five days since the election which nobody won.

Twenty hours ago David Cameron returned home wondering perhaps whether his dream was over, whether, at the last, Gordon Brown would outmanoeuvre him again.

Yet it is he who has now brought into being the partnership between two political parties which New Labour talked about but never delivered, he who has agreed to fixed-term parliaments and a referendum on voting reform, he who has made a man whose policies he attacked again and again in the prime ministerial debates his deputy prime minister and put four of his allies in the cabinet.

It is an arrangement which will either collapse under the pressure of competing tensions between and within the two parties or it will shape politics for a generation to come.

On the day the last youngest prime minister for nearly 200 years took office, the sun shone and optimism reigned, but, unlike Tony Blair, David Cameron took office on a cold dark night issuing a warning about hard and difficult decisions to come.

He did so in a manner, however, that suggested he is determined to shape events and not to be shaped by them.