Does one good smear deserve another?

Bristol: Today, Peter Mandelson said that the allegations in the press about Nick Clegg were "straight out of the Tory Party dirty-tricks manual". He even suggested that the Conservative director of communications Andy Coulson had had a hand in them. 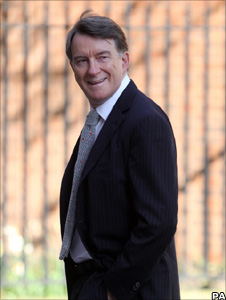 But isn't this simply a smear designed to lay blame for the smears against Nick Clegg firmly at the door of the Tories?

Lord Mandelson has not provided any evidence that Andy Coulson was involved; indeed, there are plenty of reasons to think he may well have not have been.

The Telegraph story originates from the newspaper's files of bank accounts acquired during the expenses investigation. The Mail story is sourced from a Guardian article which anyone could have found with a simple Google search. The Sun may well have had the odd chat with Mr Coulson: I'm sure they do; after all, the editor is a good friend of his.

Now there's no doubt that many Tories are in a panic about Nick Clegg's advance - nor that the Tory press are out to get him - but as yet there is no evidence that the Tory leadership were behind this morning's stories and until there is we must conclude that Lord Mandelson is trying to make a story about the Liberal Democrats into one that is damaging for David Cameron.

Update 1939: I now learn that political reporters from the Tory-backing papers were called in one by one to discuss how Team Cameron would deal with "Cleggmania" and to be offered Tory HQ's favourite titbits about the Lib Dems - much of which appears in today's papers.

The key personal allegation about payments from donors into Nick Clegg's personal
bank account came, however, from the Telegraph's expenses files. Incidentally, the party has now published details of Nick Clegg's bank statements and party accounts showing that Mr Clegg received payments totalling £19,690 from three businessmen (Neil Sherlock, Michael Young, Ian Wright) and then paid staff costs of £20,437.30 out of the same account. According to these figures, Mr Clegg actually paid £747.30 out of his own money towards staff costs.