Clegg: No-one knows what to think

The spirit of Dunkirk has gripped the nation. The country has found a politician it likes even more than Winston Churchill, according to one poll. How long can it be, then, before we see a national government led by Nick Clegg? 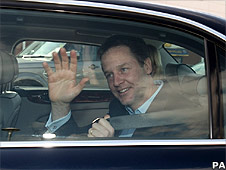 What makes this election so unpredictable is that I can write that paragraph without it seeming like an absurd fantasy. In public, senior Labour and Conservative figures described Cleggmania either as like a teenage crush, in the case of Peter Mandelson, or as "the biggest load of media-driven nonsense since the funeral of Diana" - that was Boris Johnson speaking.

Privately, people on all sides admit that they simply do not know what to think.

One poll finding captures what I think is going on. Populus asked people whether it was time for a change from Labour. 75% said "yes". Was it time, the poll went on, for a change to the Conservatives? Only 34% said "yes". Soon, it will be "make your mind up" time for that 41%.

The two big parties will struggle to tap into the mood for change, deploying the argument for political renewal and banker-bashing in Labour's case and spelling out what "the Big Society" means in the Tories'. Both will, however, deploy, above all, fear. "Imagine how you'll feel if you wake up on 7 May and find [either Gordon Brown or David Cameron] outside No 10 - and just think of the chaos an uncertain result could unleash."

Nick Clegg will try, Obama-like, to ride the wave of discontent with the other two all the way to polling day. My hunch is that the public is increasingly treating opinion-poll questions like voting in the X Factor - a sort of instant verdict on who you want to keep in the contest to make it more fun.

The country will, just as in the X Factor, only make up its mind who it wants to win at the last minute. Let me stress that I am not - repeat, not - comparing Nick and Vince with the Jedward twins.

If the Lib Dems are not to be squeezed by that most powerful of emotions, fear, they will have to make the positive case for what they used to call "breaking the mould" of British politics.

They will have to convince people that it is worth risking waking up with a prime minister you may not want, the uncertainties of a hung Parliament and the tedium of a debate about changing the voting system for the sake of creating a new politics where the idea of Prime Minister Clegg in a national government seems no more bizarre than the idea of a fleet of small ships crossing the channel to rescue stranded Britons.