"Pure revenge plus". That is how one friend of the former ministers suspended from the Parliamentary Labour Party (PLP) described the news last night. 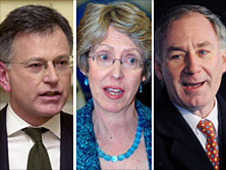 Geoff Hoon and Patricia Hewitt, you will recall, launched January's botched coup attempt against Gordon Brown. Stephen Byers has backed every effort to unseat his leader after the two clashed repeatedly in government.

The "plus" refers to an alleged attempt to cleanse the Labour Party of Blairites before a possible leadership contest if Labour loses the election.

The anger of the three - and their supporters - is increased by the fact that none has yet been informed of the suspension, let alone the reasons for it.

It is a claim that is furiously dismissed by the many Labour MPs who were outraged by the sight of former ministers appearing to want to trade on their connections and those who simply can't believe their stupidity at getting caught so close to an election.

It is, though, a warning of the fight that may lie ahead. Given that so many Blairites are retreating from the battlefield, and given the self-destructive behaviour of some, it is a fight they have almost certainly already lost.