Gordon Brown at the Iraq inquiry

Heavily prepared. Heavily made-up. Gordon Brown was so eager to make his defence that he strode into the Iraq inquiry before the committee itself had settled comfortably in their seats. 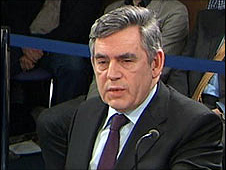 Again and again he spelt out his explanation of his own role often ignoring questions to the evident frustration of those asking.

It was like watching a skilful chess player who had a defensive move prepared for every possible attack. Yes Iraq had been the right decision for the right reasons but of course he had regrets.

As for those missing weapons of mass destruction he had believed the information he had been given by the intelligence services .

Financially he had given the armed forces everything they could have wanted and what's more he wished he had managed to persuade the Americans to take reconstruction more seriously.

It was only when Sir Roderic Lyne, the skilful former diplomat, pushed him on whether he had been told by Tony Blair what the then prime minister had told President Bush did Gordon Brown stumble.

Once again he avoided the question, so blatantly that this time the audience broke into laughter. Yet throughout this morning Gordon Brown will feel he has not made a mistake.

The big problem for him may come when the issue turns to money and the decisions around the Ministry of Defence budget which caused problems not so much in Iraq but later in Afghanistan.