If you landed from outer space today what might you make of the news that the three men who have a chance of becoming our next prime minister are to debate live on national television? 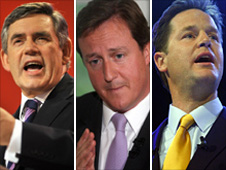 You might ponder why it's taken more than 50 years since the widespread use of television for this to happen.

To misquote Star Trek's Dr McCoy, you might note that these are debates, Jim, but not as we know them.

What you would be ignoring if you focused on all that, though, is that the men who want to be in No 10 will be debating questions posed by voters at length and in detail without playing to the baying hoards on the green benches in the Commons or the noisy audience on Question Time.

You would be ignoring the fact that as well as the carefully timed one-minute answers and rebuttals there will be four minutes of free range debate possible for each question.

You would be ignoring what a big step this has been for a prime minister who doesn't like TV and a leader of the opposition who, as the front runner, had every reason to block rather than promote debates as David Cameron did.

Above all, though, you would be ignoring the fact that this agreement between Britain's main parties and main broadcasters makes history.

The leaders of the UK's main parties have agreed to boldly go where no man has gone before.