Too busy to get stuck into the detailed claims and counter claims of how the prime minister treats those he works with?

Gordon Brown doesn't hit his staff - something not actually alleged in Andrew Rawnsley's book The End of the Party but which the PM was asked about and denied in an interview with Channel 4 last night.

The prime minister does, however, throw things when he gets angry. He said so in the same interview. 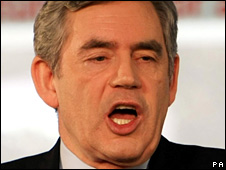 So, is he a bully? Bullying, like beauty, is in the eye of the beholder.

This morning his closest political ally Peter Mandelson declared: "I don't think he so much bullies people but is demanding... there is a degree of impatience about the man."

Finally, did the cabinet secretary investigate the prime minister's behaviour and warn him about it?

Last night a Cabinet Office spokesman denied an allegation that was never actually made when they stated: "It is categorically not the case that the cabinet secretary asked for an investigation of the prime minister's treatment of No 10 staff."

Indeed, Sir Gus O'Donnell did not ask for or initiate a formal investigation into Gordon Brown's behaviour.

Well, he wouldn't would he? No denial has been made, however, that Sir Gus - who worked with Gordon Brown at the Treasury - talked to No 10 staff himself and advised the PM to treat them better.

Was this an "investigation" and "a warning" or is that journalistic hyperbole to describe friendly advice to a politician from his leading official?

We don't and may never know.

So what is not in dispute here is the description of how the PM behaves, although Downing Street does dispute individual stories. The question is whether it matters.

The prime minister's friends and allies may dispute the details of particular incidents but, in general, they have chosen to publicly defend his behaviour as that of a demanding leader determined to do what's right.

Privately, many express their unhappiness with it but insist that the PM's weaknesses are more than outweighed by his qualities.

His critics say that Brown's behaviour is unacceptable and disqualifies him from being the nation's leader.

As ever, it is you who gets to decide.