Why attempt to topple Brown failed 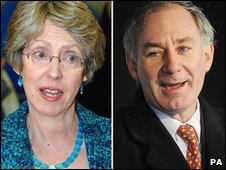 Geoff Hoon and Patricia Hewitt insist that they had no direct contact with any member of the Cabinet but one rebel who was involved in planning their revolt told me: "We wanted to create a storm. Our purpose was to create the space for the Cabinet to act. They bottled it."

Sources named the potential Cabinet rebels as Harriet Harman, David Miliband, Bob Ainsworth, Jack Straw, Jim Murphy and Douglas Alexander. There is no suggestion or evidence that any of those named was involved in planning today's coup attempt. Indeed they all issued statements criticising it. The rebels believed, however, that each of the six named ministers agreed with their view that a change of party leader was necessary and would act accordingly.

One of those named criticised the way today's plot was organised telling me: "It was amateurish. It could never have succeeded."

The minister pointed out that many in the Cabinet had waited many hours before issuing statements saying that they did not support the rebel moves and that the wording of their statements did not always give backing to Gordon Brown personally. For example, the Foreign Secretary David Miliband did not issue a statement until just before seven o'clock declaring that "I am working closely with the prime minister on foreign policy issues and support the re-election campaign for a Labour government that he is leading,"

The letter calling for a secret ballot on the Labour leadership was issued at around 1230. It was many hours later that senior Cabinet ministers issued statements or gave interviews

At 1720 the Justice Secretary Jack Straw said to the BBC that he did not support the ballot:

"The polls are better now than they were immediately before Gordon Brown took over. Our fortunes are linked to the fortunes of the country and indeed the economy... I do not think there is an issue about the direction that Gordon Brown and the Cabinet and the government as a whole are trying to lead this country."

"We are all getting on with our jobs as ministers in a government that Gordon leads. We are united in our determination to do what is best for the country and win the general election."

"Gordon Brown has shown he can deliver for the British people. As general election co-ordinator, my focus is, and will remain, on securing Labour's re-election: that is what I believe our party wants and our country needs."

"The PM has the support of his colleagues. My focus is, and has to be, on our Armed Forces in Afghanistan and elsewhere."

"I am working closely with the prime minister on foreign policy issues and support the re-election campaign for a Labour government that he is leading."

Unlike the others, the Scottish Secretary Jim Murphy responded quickly giving an interview at around 1400:

"This is a distraction from the important work of protecting jobs and working towards the economic recovery. This is particularly important in Scotland where the SNP government are just not doing enough."

Update: An earlier version of this post timed Douglas Alexander's statement at 1930 rather than 1830; apologies.