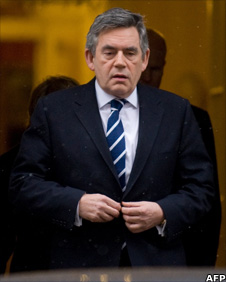 This is without precedent - in this country at least.

However, those who want to see Gordon Brown go might look to Australia where Bob Hawke was installed as leader of the Labor Party and faced an election 25 days later.

He won that election by a landslide, ending over seven years of conservative rule. Critically, however, that coup made Hawke leader of the opposition and not prime minister.

Now, of course, there may never be a secret ballot on the Labour leadership let alone a decision to remove Gordon Brown. After all, when James Purnell walked out of the cabinet calling for a change of leader his coup attempt failed within hours.

After that, backbench critics of Brown decided that they could not rely on the cabinet to act for them - either because they lacked the courage or because, for those like David Miliband and Alan Johnson, resignation would destroy their chance of leading.

The other main obstacle to a contest was the fear of many Labour MPs that the pain of public division might be worse than sticking with a leader who many are convinced is taking them to certain defeat.

This call for a secret ballot is designed to overcome those two obstacles - by giving the initiative to backbenchers not the cabinet and by bringing forward the pain of public division so that the fear of it is removed as a factor.

Don't believe Labour MPs and ministers who say they've not talked about changing leader. For months the talk's been of little else.

However, up until now it's looked like staying just that - talk. It may yet. This could all be over about as quickly as it began. Keep watching though because it could lead to a change of prime minister sooner than you think

PS Feel free to mock away at my on air dismissal of yesterday's rumours about a cabinet minister resigning to force Gordon Brown out. That'll teach me. No minister has resigned, of course - not yet anyway!