It was the exposure he'd long dreamed of. It was the opportunity to move from the fringes to the mainstream. It was a moment when Nick Griffin - the self-styled "most loathed man in Britain" - could have tried to persuade the British people that he thought what they thought about immigration and that voting for him could shake the cosy political establishment out of its complacency. 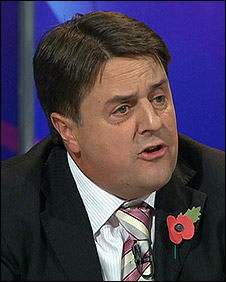 That's what the leader of the BNP hoped for. It's what those who despaired about his invitation to appear on Question Time feared. That is not how it turned out.

Exposure can work both ways. For much of the programme, Nick Griffin did not speak to the British people. He talked instead about himself and struggled to explain his past views and actions.

On the other hand, he could and did say that the "indigenous people of Britain" - by which he insisted he did not mean whites - were themselves victims of genocide. Surprisingly few of them appear to have noticed.

The Ku Klux Klan was not all bad, he went on, but Islam mostly was. And so on and so on.

That is not to say that Nick Griffin did not take the opportunity to make a direct appeal to voters. He presented himself as the moderniser of the far right - the creator of "New BNP". The old BNP had, he conceded, been racist. He had talked of wanting to create an all-white Britain. But now he and his party merely wanted to shut the door to newcomers and were happy to let everyone else stay.

Will that convince many? Probably not, but it may give cover to those who are fed up that their views and concerns have been ignored. There may well be people who feel that Nick Griffins views are too eccentric or too dangerous to make him a candidate for high office but who, nevertheless, feel that voting for him is a means to give the rest of the political class a mighty big kick.

That, in the end, will be the key to whether the BNP continues to rise or begins to fall. Will voters now feel they know what the BNP really stands for and cannot stand for it? Or will they say that's largely irrelevant if your aim is to tell other politicians: "It's time you woke up to our concerns"?