David Cameron has told me that he has been talking to Gen Sir Richard Dannatt, the former head of the British Army, about taking a role in a future Tory government. 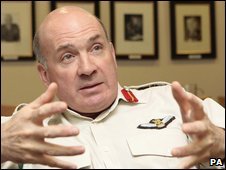 Earlier, Gen Dannatt told 5 live that he would consider taking up a post in a Conservative government.

He also says that he believes that the government tried to damage his reputation because it disagreed with his advice on sending troops to Afghanistan.

Gen Dannatt says the government resorted to "politics by smear" after "losing the argument" over tactics.