Is all publicity good publicity?

This week will put that old maxim to the test. The British National Party are getting more publicity than they can have dreamed of, culminating in a controversial appearance for Nick Griffin on Question Time. 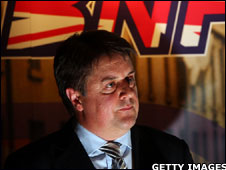 Many will be deeply uncomfortable with this. Others argue that it is the inevitable consequence of the BNP's electoral - albeit limited - success. What's more, one senior Tory argues, the BNP leader's linking of two distinguished former generals with Nazi war criminals shows the value of exposing the party's arguments.

Until recently, most mainstream politicians have gone out of their way to avoid even talking about the BNP in order to deny them the oxygen of publicity. Ever so quietly behind the scenes, all the mainstream parties co-operated to try to head off the threat from the BNP - sharing intelligence about them and working to ensure that they faced proper opposition wherever they stood.

Then a number of Labour politicians who saw the party's rise in their areas - Margaret Hodge in Barking and Jon Cruddas in Dagenham - abandoned that approach and tried to force their own party to address the anxieties of white working-class voters who they feared were defecting. Some used anti-BNP campaigns to rally Labour activists who were otherwise reluctant to campaign for their party.

Now Conservatives are reacting to fears that the BNP is successfully hijacking traditional symbols of patriotism - the flag, the Spitfire and the poppy. Hence the campaign organised by two well-connected Tory activists which shot to prominence yesterday when a group of senior military figures joined the fray.

This week may mark an important shift in the way in which the other parties handle the threat from the British National Party, though all will be watching with some trepidation the opinion polls that follow.

It is worth remembering that the party remains a very small force. As I wrote after the European elections, the BNP's two MEPs were elected on a smaller share of the vote. They have just a few dozen councillors. However, the big parties now sense that they are a force that can no longer be ignored.

Update, 16:10: Earlier I pointed out that Nick Griffin became a member of the European Parliament even though he won fewer votes than he did five years ago.

However, lest this has led some to wonder what all the fuss is about, I should point out that nationwide the BNP's vote share went up 1.3% to over 6% and its total number of votes went up more than 16% to a figure not far shy of a million (943,598 to be precise).

In the nine regions of Great Britain where the BNP did not win a seat, its total vote went up by more than a quarter - 26.5% to be precise.

(Thanks to the European Movement for pointing this out.)