Unemployment is rising slower than many economists and, indeed, the government feared. 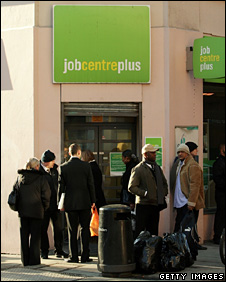 The number of people signing on rose in September by the smallest amount in 16 months (the Office for National Statistics reported this morning that the claimant count rose by 20,800, below expectations of a rise of up to 25,000).

What's more the wider so-called International Labour Organisation (ILO) measure of unemployment did not breach the 2.5 million mark as expected.

Now if you're one of those who's just lost their job or fears losing it this will come as absolutely no comfort.

However, government ministers are now expecting an unexpected windfall of several billion pounds which was set aside to pay for higher levels of unemployment planned for in the chancellor's Budget.

This will allow the Treasury to make future "savings" (in reality, of course, simply a reduction in what they would otherwise have had to borrow) without making cuts.

Ministers are also set to claim that this slowing in the rate of increase in unemployment is down to their policies and interventions which the Tories...well, you know the rest of the script.

The real economic debate will surely focus on whether it's British labour market flexibility, other inherent features of the UK economy or dodgy forecasts that account for these better than expected figures - or should that be "not as bad as feared" - rather than any short term small scale government interventions.