Has he got a Legg to stand on?

Last night in the Commons, I could not find an MP with a good word to say about the man asked to audit and cleanse their expense claims - asked by the Commons, mind. 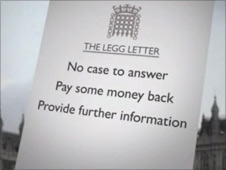 Senior MPs with a legal background said Sir Thomas would not have a leg to stand on if his demands for repayments - based on rules he is applying retrospectively - ever came to court. They point to the fact that his remit invited him to assess claims by the "rules and standards in force at the time".

I have now obtained a copy of the document that all MPs have been sent by Sir Thomas which explains why he has acted as he has.

Sir Thomas says that "to interpret and determine the rules and standards" applying at the time was "not a straightforward task".

He points out that the Commons Fees Office frequently allowed "disproportionate claims" which "must be judged to have been in breach of the rules".

He notes that "in some areas, such as household furniture and equipment... the Fees Office did in fact impose... limits" - in other words, the infamous John Lewis list.

When it comes to mortgages, he says that "the upper limit of the allowance may normally be taken as the relevant and sufficient control" - in other words, those who "claimed to the max" for their mortgage do not risk having to repay money (unless, of course, their claim contained errors).

However, Sir Thomas notes that in other areas - cleaning and garden maintenance - "some limits must be regarded as having been place to prevent disproportionate and unnecessary expenditure from the public purse".

That is why Gordon Brown has a large cheque to write, whereas David Cameron does not. It is also why Labour MPs were cursing the PM last night for proposing - albeit with all-party support - the Legg Review.