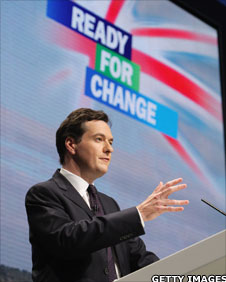 This was no ordinary electioneering speech by George Osborne.

This is, of course, no ordinary time.

The Tories' calculated gamble is that they will be rewarded for being open, up-front and honest about the pain that lies ahead. What's more, they have tried to signal that - in the phrase the shadow chancellor used again and again - "we are all in this together".

Thus, the right will not get its 50p tax rate cut while others will see their pay frozen. Thus, no-one on less than £18,000 will have their pay frozen, and baby bonds and child tax credits will still be paid to the poorest.

In the past, politicians have learned to their cost that honesty is not always the best policy. Voters who applaud talk of tough choices tend to howl when those choices hurt them.

They know that John Smith's shadow budget of 1992 was applauded for being honest about the tax rises needed to pay for Labour's spending promises. They know that New Labour blamed him and it for losing them the election. They hope that they will prove that history does not have to repeat itself.