Return of the soapbox

I've seen the future. One minute, I was interviewing the leader of Her Majesty's Opposition in jacket and tie; the next, "Dave" - now in rolled-up short sleeves - had discarded his neck gear and clambered on top of what looked suspiciously like John Major's soapbox. 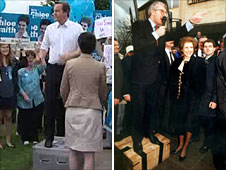 We are, I'm told, going to see much more of the soapbox that was produced in Norwich yesterday.

We will also, I believe, have to get used to speeches attacking Gordon Brown for "treating people like fools" - on the election that never was, public spending and helicopters for Afghanistan.

This theme is one reason that David Cameron can seem, to many of his colleagues, so stubborn about abandoning previous pledges, whether cutting inheritance tax or ring-fencing spending on international aid. He's under pressure from some in the party to junk them both.

According to Tories who have spoken to "Dave", he is obsessed with not "looking like another Blair" and all of this is about proving that he is a leader the public can trust.