Honesty is the new battleground in British politics. Hence Peter Mandelson's demand that the shadow chancellor withdraw what the first secretary has dubbed a "deliberate untruth" in his interview with me yesterday. 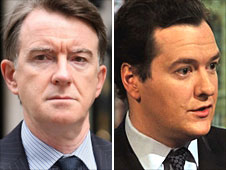 George Osborne boasted that that he was being honest about public spending whilst accusing ministers of "lying" (yes, he unlike his leader, used the "L" word). He went on to accuse the prime minister of blocking access to a detailed breakdown of government spending.

So, what are the facts?

In pre-election meetings with the cabinet secretary in January and February, the Tories asked for access to the spending numbers broken down in over 12,000 headings. The answer - which was "No" - came many weeks later in April fuelling the Tories' belief that the prime minister had taken the final decision.

The Cabinet Office insist, however, that it was Sir Gus O'Donnell alone who decided and that, until yesterday, ministers weren't even aware of the request.

So, you might assume, George Osborne is on a sticky wicket. However, long before this row, the Tories committed publicly that they would publish these data if they get into government. Thus, publication, they can argue, is ultimately a matter for ministers.

All this raises the question: why would the government want to stop the data being published?

Whitehall sources tell me that all the information in the COINS database is already in the public domain although they concede that you may have to spend time online collating it.

It is there, they point out, because the government annually publishes to Parliament all the data by which it centrally controls public expenditure so that Parliament can vote on it and through its select committees hold the most senior civil servants to account for it.

It is, they add, published in the manner requested by and agreed with by Parliament, including the breakdown of departmental budgets into the main departmental spending programmes.

To which the Tories reply - why doesn't the government agree to publish it in a simple, digestible form allowing the public to engage in programme-by-programme scrutiny of what their tax pounds pay for?

There is, of course, an underlying tale here which has nothing whatsoever to do with public spending.

Remember "Yachtgate"? It was triggered when George Osborne was not terribly discreet about a private chat he had with Peter Mandelson before he had any clue that he would be returning to government.

Mandelson did not appreciate that breach of confidentiality. Ministers believe that Osborne has similarly abused the private chats he's had with the governor of the Bank of England and, now, the cabinet secretary.

Update, 12:13PM: Downing Street says the PM had no knowledge of the request from the shadow chancellor George Osborne to see government spending data.

The spokesman said it was a matter for senior civil servants and it would be "completely inappropriate" for the PM to become involved. He said there were normal conventions surrounding information made available to the opposition and the PM believed these should be followed.

But the shadow chancellor says he has written evidence to back up his story that the Tories repeatedly asked for financial information including the COINS database. He also claims that he was told informally that ministers and, in particular, the prime minister would block the request.