At the end of an agonisingly long select committee hearing on phone hacking we finally got a newsworthy piece of evidence. Evidence, that is, of Andy Coulson's skills as a shaper of the news. 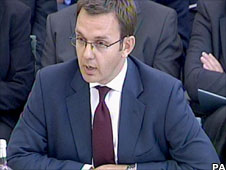 David Cameron's director of communications revealed that the police had called him only recently to reveal that his own mobile phone had been hacked into by the very private investigator who was jailed for illegal phone hacking when Coulson was editor of the News of the World.

Thus, the former editor turned spin doctor provided journalists with a top line for their stories about an otherwise dull enquiry (or am I missing something?).

The hearing was meant, of course, to examine what Andy Coulson knew about what had been going on at Britain's top-selling paper. The Guardian insists that it goes far beyond the approved News International version of events of a single journalist - a "bad apple" - who engaged in illegal activities without the knowledge of anyone else on the paper.

Today NI executives and Coulson persisted with that account. "Things went badly wrong under my editorship," he conceded, while insisting that he knew nothing about the hacking of phones or the paying of policemen.

None of the MPs who cross-questioned him today managed to blow a hole in that defence - no surprise, perhaps, since the Guardian has declared that it has no evidence to implicate him.

However, Plaid Cymru's Adam Price did make Coulson look uncomfortable when he presented him with a copy of paper he'd edited which trumpeted an "exclusive" about Prince Harry and Chelsy. Price suggested this story could only have come from the illegal phone hacking. Coulson's reply was that he had no involvement in or recollection of the story. No-one said what I imagine many were thinking - "come off it".

David Cameron will be told that his valued aide has emerged unscathed from today and may even break into a grin when he learns that he also managed to present himself as a victim rather than a villain in this story.